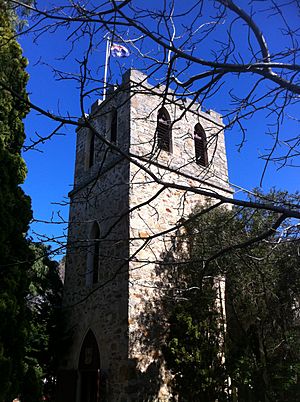 The church is a stone building with gabled roofs covered in shingles. The aisle of the church is made from 22-centimetre (9 in) thick blocks that had been made in England. The stone walls are 540 millimetres (21 in) thick and the building also has stone foundations; the stone was thought to be quarried from nearby Mount Melville and Mount Clarence. The walls are so thick that no buttresses are required. The original building is now the nave of the present church, with the gallery behind built in 1852. The tower and porch were completed in 1853. The tower is topped with battlements on the parapet.

The church was built by the people of the town, with construction commencing in 1841 and completed in 1844. The church was consecrated on 25 October 1848 by Bishop Augustus Short of Adelaide who introduced John Ramsden Wollaston as its clergyman. At this time the church would have been able to accommodate the entire population of the town, 170 people.

Construction of the rectory commenced in 1850 and was completed the same year. Originally it was a single story stone building, however a second storey was added in 1875. A second rectory was built behind the original one in 1980.

The first recorded Anzac dawn service was held by the church in 1930.

The church, rectory, hall and peppermint trees were listed on the register of the National Trust in 1978.

Canon Edward Argyl was appointed as the parish priest in 2011 until his death in 2015.

All content from Kiddle encyclopedia articles (including the article images and facts) can be freely used under Attribution-ShareAlike license, unless stated otherwise. Cite this article:
St John's Anglican Church, Albany Facts for Kids. Kiddle Encyclopedia.