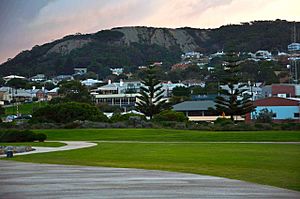 Mount Melville is a south-western suburb of Albany in southern Western Australia, west of Albany's central business district. Its local government area is the City of Albany.

Mount Melville is named after the natural granite massif that the suburb is nestled around. The mount forms the western flank to the Albany CBD, with Mount Clarence located to the eastern side.

The Mount was named after Viscount Melville, the Lord of the Admiralty, by Captain James Stirling.

Mount Melville was gazetted as a suburb in 1979.

The suburb is bounded by Albany Highway to the north and east, by Hanrahan Road to the west and by Princess Royal Harbour to the south.

It is set within native bush with walk trails and a sealed road to the top. A distinctive observation tower is situated at the peak that offers panoramic views as far as the Stirling Range to the north.

The western side of Mount Melville is the site of the town's main waste management facility.

All content from Kiddle encyclopedia articles (including the article images and facts) can be freely used under Attribution-ShareAlike license, unless stated otherwise. Cite this article:
Mount Melville, Western Australia Facts for Kids. Kiddle Encyclopedia.