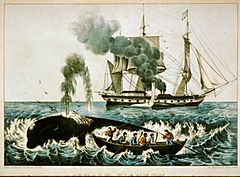 Whaling in the later 19th century.

Whaling is the practice of hunting whales. This is done to get meat and oil, called blubber. Hunters of whales are called whalers. Whaling has been done at least since 3000 BC.

Many communities on the coast have done whaling for food for a long time. They have also killed stranded whales.

Industrialisation started in the 17th century and also affected whaling. Special ships were built for whaling, and whales were hunted until they were almost extinct.

As technology improved and demand for the seemingly vast resources remained high, far more whales were killed than were born. In the late 1930s more than 50,000 whales were killed each year. By the middle of the 20th century, there were not enough whales and they were at risk of becoming extinct. In 1986, the International Whaling Commission introduced a moratorium on commercial whaling so that whales might recover.

This moratorium was successful, and whale stocks recovered. There is a debate about whaling in general. Countries which are in favor of whaling want to do away with the moratorium, so they can again hunt whales as they did before. Countries and environmental groups say that whaling is immoral and should be banned, and that stocks have not yet recovered sufficiently.

The History of Hunting

Whales have a thick layer of fat under their skin called blubber. For many years, the Eskimos of Alaska depended on these whales to live. Every part of a whale was used: the bones, the blubber, and the skin - every bit of it. In this way, one whale could feed an Eskimo community for a long time. They were important to the Eskimos. However, sometimes a good thing can get out of control and become a bad thing. This was what happened in whale hunting.

Whale blubber was not used only by Eskimos. Soon it became a product everybody wanted. This was because before electricity was invented, blubber was used as oil for lamps. They also used whale blubber to oil machines and make expensive makeup. Because of this, people hunted and killed whales to make money.

The whalers found out the paths whales liked to take in the ocean, and killed them mercilessly. It was a dangerous and frightening job. Whalers would jump into a small boat and follow the whale. Once they were close to it, they would throw a harpoon that was attached to a very long rope into the whale. The end of this harpoon was not at all like a spear. It had a switch blade on the end that would stay in the whale's skin. Once the harpoon was in the whale, the whale would start swimming as fast as it could. The whale might swim day and night with no stop for several days. Eventually, the tired and hurt whale would stop. The whalers would then kill the whale with one last harpoon. When the animal died, the whalers would haul the whale onto the ship (big or small), skin it, then boil the blubber for the oil. 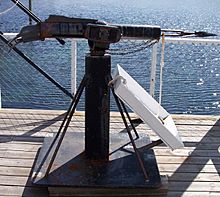 Soon, boats began getting bigger. Whalers began using a harpoon like before, but the harpoon has a grenade inside. This was very cruel way of killing whales as it hurt them a lot. The whale would then have blood coming out of its blowhole. This meant the whale would die soon.
Sometimes entire whale families were found, and as many were killed as possible. Because of whaling, several kinds of whales became almost extinct.

More happily, whales are protected by conservation laws that stop people from killing too many of them. Also, chemists invented many products that take the place of whale blubber, and kerosene replaced whale oil in lamps. Now, many countries have agreed not to hunt whales, because otherwise all the whales might die. They signed a treaty agreeing on this though Norway and Japan still hunt whales. Russia and the United States also practising whaling, on a much smaller scale. (Japan still does hunt often, however).

All content from Kiddle encyclopedia articles (including the article images and facts) can be freely used under Attribution-ShareAlike license, unless stated otherwise. Cite this article:
Whaling Facts for Kids. Kiddle Encyclopedia.