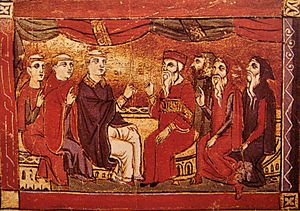 Debate between Catholics and Oriental Christians in 1290, Acre

Debate or debating is a method of argument. Disputes and conflicts may be settled by debate. It is a larger form of argument than logical argument, because in a debate, the debaters try to influence the feelings of the audience, in order to persuade them on a topic.

The subject or issue of the debate is the question on which the participants debate. An issue or debate always has two sides or positions. Informal debates like discussion are very common, but the quality of a debate improves with knowledge and skill of its participants as debaters.

Deliberative bodies such as parliaments, legislative assemblies, and meetings of all sorts have debates. The winner of a debate may be decided by the audience's vote, by judges, or by both.

Formal debates between candidates for an elected office are common in places where leaders of countries are chosen by the people. The most well-known of these debates are between candidates for the President and Vice President of the United States, and leaders debates between leaders of parties in Parliament in countries like Great Britain and Canada.

All content from Kiddle encyclopedia articles (including the article images and facts) can be freely used under Attribution-ShareAlike license, unless stated otherwise. Cite this article:
Debate Facts for Kids. Kiddle Encyclopedia.