The bowhead whale (Balaena mysticetus) is an Arctic baleen whale, a right whale with a large, bow-shaped head that is up to 40% of its body length. The arched mouth is up to 10 feet (3 m) wide and 20 feet (6 m) deep. The eyes are very small and lips are huge. Bowheads live in pods, are rich in blubber (a subcutaneous layer 20-inch (50 cm) thick in places), and have 2 blowholes. 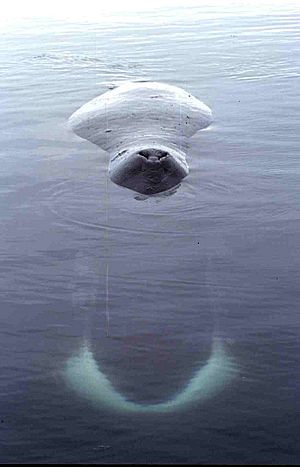 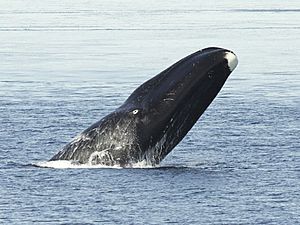 Bowhead whales are not social animals, typically traveling alone or in small pods of up to 6. They are able to dive and remain submerged underwater for up to an hour. However, the time spent underwater in a single dive is usually limited to 9–18 minutes. Bowheads are not thought to be deep divers but they can reach a depth of up to 500 ft (150 m). These whales are slow swimmers, normally traveling at about 2–5 km/h (1.2–3.1 mph). When fleeing from danger, they can travel at a speed of 10 km/h (6.2 mph). During periods of feeding, the average swim speed is reduced to 1.1–2.5 m/s (3.6–8.2 ft/s).

The head of the bowhead whale comprises a third of its body length, creating an enormous feeding apparatus. Bowhead whales are filter feeders, feeding by swimming forward with mouth wide open. The whale has hundreds of overlapping baleen plates consisting of keratin hanging from each side of the upper jaw. The mouth has a large upturning lip on the lower jaw that helps to reinforce and hold the baleen plates within the mouth. This also prevents buckling or breakage of the plates from the pressure of the water passing through them as the whale advances. To feed, water is filtered through the fine hairs of keratin of the baleen plates, trapping the prey inside near the tongue where it is then swallowed. The diet consists of mostly zooplankton which includes copepods, amphipods, and many other crustaceans. Approximately 2 short tons (1.8 long tons; 1.8 t) of food is consumed each day. While foraging, bowheads are solitary or occur in groups of two to ten or more.

Mating occurs between pairs and in boisterous groups of several males and one or two females. Breeding season is observed from March through August; conception is believed to occur primarily in March when song activity is at its highest. Reproduction can begin when a whale is 10 to 15 years old. The gestation period is 13–14 months with females producing a calf once every three to four years. Lactation typically lasts about a year. To survive in the cold water immediately after birth, calves are born with a thick layer of blubber. Within 30 minutes of birth, bowhead calves are able to swim on their own. A newborn calf is typically 4–4.5 m (13–15 ft) long, weighs approximately 1,000 kg (2,200 lb), and grows to 8.2 m (27 ft) within the first year.

Bowhead whales are known to be among the longest-living mammals, living for over 200 years. In May 2007, a 15 m (49 ft) specimen caught off the Alaskan coast was discovered with the 3.5 in (89 mm) head of an explosive harpoon of a model manufactured between 1879 and 1885. The harpoon was probably manufactured in New Bedford, Massachusetts, a major whaling center at the time, and experts estimated that the wound was inflicted around 1890. According to one analysis, the whale was probably harpooned sometime between 1885 and 1895. The whale's age at the time of death was estimated at between 115 and 130 years. Spurred by this discovery, scientists measured the ages of other bowhead whales; one specimen was estimated to be 211 years old. Other bowhead whales were estimated to be between 135 and 172 years old. This discovery showed the longevity of the bowhead whale is much greater than originally thought.

It was previously believed the more cells present in an organism, the greater the chances of mutations that cause age related diseases and cancer. Although the bowhead whale has thousands of times more cells than other mammals, the whale has a much higher resistance to cancer and aging. In 2015, scientists from the US and UK were able to successfully map the whale's genome. Through comparative analysis, two alleles that could be responsible for the whale's longevity were identified. These two specific gene mutations linked to the bowhead whale's ability to live longer are the ERCC1 gene and the proliferating cell nuclear antigen (PCNA) gene. ERCC1 is linked to DNA repair as well as increased cancer resistance. PCNA is also important in DNA repair. These mutations enable bowhead whales to better repair DNA damage, allowing for greater resistance to cancer. The whale's genome may also reveal physiological adaptations such as having low metabolic rates compared to other mammals. Changes in the gene UCP1, a gene involved in thermoregulation, can explain differences in the metabolic rates in cells. 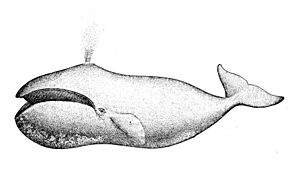 The bowhead whale is the only baleen whale to spend its entire life in the Arctic and sub-Arctic waters. The Alaskan population spends the winter months in the southwestern Bering Sea. The group migrates northward in the spring, following openings in the ice, into the Chukchi and Beaufort seas. It has been confirmed the whale's range varies depending on climate changes and on the forming/melting of ice.

Historical range could have been broader and more southern than that of currently regarded as bowheads had been abundant among Labrador and Newfoundland (Strait of Belle Isle), and northern Gulf of St. Lawrence at least until 16th and 17th century although it is unclear this was whether or not due to colder climate of those periods. Distributions of Balaena during Pleistocene were far more southerly as fossils have been excavated from Italy and North Carolina, and thus could have overlapped between those of Eubalaena based on locations where fossils have been excavated.

Alaskan Natives continue to hunt small numbers of Bowhead Whales for subsistence purposes. The Alaska Eskimo Whaling Commission, an Alaska Native organization that manages the Bowhead subsistence harvest under a cooperative agreement with the National Oceanic and Atmospheric Administration, sets the harvest quota for each whaling village. The Alaskan villages that participate in the Bowhead subsistence harvest include: Barrow, Point Hope, Gambell, Savoonga, Wainwright, Kivilina, Nuiqsut, Kaktovik, Wales, and little Diomede. The annual subsistence harvest of the Western Arctic stock has ranged from 14 to 72, amounting to an estimated 0.1-0.5% of the population.

In March 2008, Canada's Department of Fisheries and Oceans stated the previous estimates in the eastern Arctic had under-counted, with a new estimate of 14,400 animals (range 4,800–43,000). These larger numbers correspond to prewhaling estimates, indicating the population has fully recovered. However, if climate change substantially shrinks sea ice, these whales could be threatened by increased shipping traffic.

The status of other populations is less well known. There were about 1,200 off West Greenland in 2006, while the Svalbard population may only number in the tens. However, the numbers have been increasing in recent years.

Not much is known about the endangered Sea of Okhotsk population. To learn more about the population, these mammals have been regularly observed near the Shantar Islands, very close to the shore, such as at Ongachan Bay. Several companies provide whale watching services which are mostly land-based. According to Russian scientists, this total population likely does not exceed 400 animals. Scientific research on this population was seldom done before 2009, when researchers studying belugas noticed concentrations of bowheads in the study area. Thus, bowheads in the Sea of Okhotsk were once called "forgotten whales" by researchers. WWF welcomed the creation a nature sanctuary in the region

Possibly, vagrants from this population occasionally reach into Asian nations such as off Japan or Korean Peninsula (although this record might or might not be of a right whale). First documented report of the species in Japanese waters was of a strayed infant (7 m [23 ft]) caught in Osaka Bay on 23 June 1969, and the first living sighting was of a 10 m (33 ft) juvenile around Shiretoko Peninsula (the southernmost of ice floe range in the northern hemisphere) on 21 to 23 June 2015. Fossils have been excavated on Hokkaido, but it is unclear whether or not northern coasts of Japan once had been included in seasonal or occasional migration ranges.

The most endangered but historically largest of all bowhead populations is the Svalbard/Spitsbergen population. Occurring normally in Fram Strait, Barents Sea and Severnaya Zemlya along Kara Sea to Laptev Sea and East Siberian Sea regions, these whales were seen in entire coastal regions in European and Russian Arctic, even reaching to Icelandic and Scandinavian coasts and Jan Mayen in Greenland Sea, and west of Cape Farewell and western Greenland coasts. Also, bowheads in this stock were possibly once abundant in areas adjacent to the White Sea region, where few or no animals currently migrate, such as the Kola and Kanin Peninsula. Today, the number of sightings in elsewhere are very small, but with increasing regularities with whales having strong regional connections. Whales have also started approaching townships and inhabited areas such as around Longyearbyen. The waters around the marine mammal sanctuary of Franz Josef Land is possibly functioning as the most important habitat for this population.

Current status of population structure of this stock is unclear; whether they are remnant of the historic Svalbard group, re-colonized individuals from other stocks, or if a mixing of these two or more stocks had taken place. In 2015, discoveries of the refuge along eastern Greenland where whaling ships could not reach due to ice floes and largest numbers of whales (80–100 individuals) ever sighted between Spitsbergen and Greenland indicate that more whales than previously considered survived whaling periods, and flows from the other populations are possible.

During expeditions by a tour operator 'Arctic Kingdom', a large group of bowheads seemingly involved in courtship activities were discovered in very shallow bays in south of Qikiqtarjuaq in 2012. Floating skins and rubbing behaviors at sea bottom indicated possible moulting had taken place. Moulting behaviors had never or had seldomly been documented for this species before. This area is an important habitat for whales that were observed to be relatively active and to interact with humans positively, or to rest on sea floors. These whales belong to Davis Strait stock.

Isabella Bay in Niginganiq National Wildlife Area is the first wildlife sanctuary in the world to be designed specially for bowhead whales. However, moultings have not been recorded in this area due to environmental factors.

The principal predators of bowheads are humans.{{dubious||There's only subsistence hunting nowadays, unlikely to kill more whales than non-human predators Killer whales are also known predators. Bowheads seek the safety of the ice and shallow waters when threatened by killer whales. 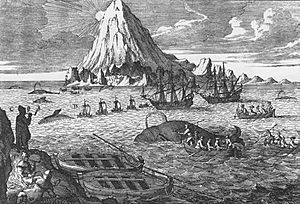 The bowhead whale has been hunted for blubber, meat, oil, bones, and baleen. Like the right whale, it swims slowly, and floats after death, making it ideal for whaling. Before commercial whaling, they were estimated to number 50,000.

Commercial bowhead whaling began in the 16th century, when the Basques killed them as they migrated south through the Strait of Belle Isle in the fall and early winter. In 1611, the first whaling expedition sailed to Spitsbergen. By mid-century, the population(s) there had practically been wiped out, forcing whalers to voyage into the "West Ice"—the pack ice off Greenland's east coast. By 1719, they had reached the Davis Strait, and by the first quarter of the 19th century, Baffin Bay.

Bowheads were first taken along the pack ice in the northeastern Sea of Okhotsk, then in Tausk Bay and Northeast Gulf (Shelikhov Gulf). Soon, ships expanded to the west, catching them around Iony Island and then around the Shantar Islands. In the Western Arctic, they mainly caught them in the Anadyr Gulf, the Bering Strait, and around St. Lawrence Island. They later spread to the western Beaufort Sea (1854) and the Mackenzie River delta (1889).

Commercial whaling, the principal cause of the population decline, is over. Bowhead whales are now hunted on a subsistence level by native peoples of North America.

All content from Kiddle encyclopedia articles (including the article images and facts) can be freely used under Attribution-ShareAlike license, unless stated otherwise. Cite this article:
Bowhead whale Facts for Kids. Kiddle Encyclopedia.