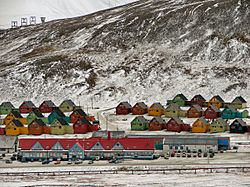 Longyearbyen is the largest settlement and the administrative centre of Svalbard, Norway. As of 2013, the town had a population of 2,043.

Because Longyearbyen is quite far north, it has very long daylight hours during the summer, and very short daylight hours in the winter. It has midnight sun between 19 April and 25 August. Longyearbyen has polar night between 27 October and 15 February. It is milder than other places at the same latitude, due to warming from the sea. This means that surprisingly high temperatures can occur. For example, Longyearbyen reached almost into double figures Celsius on 30 January 1984. The warmest recorded temperature was as high as 25 °C (77 °F) on 17 July 1977. The coldest temperature was a very cold −46.3 °C (−51.3 °F) on 4 March 1986. Longyearbyen is badly affected by global warming, due to its Arctic position. On 1 August 2015, a record August temperature of 23.6 °C (74.5 °F) was recorded.

All content from Kiddle encyclopedia articles (including the article images and facts) can be freely used under Attribution-ShareAlike license, unless stated otherwise. Cite this article:
Longyearbyen Facts for Kids. Kiddle Encyclopedia.