Chionoecetes is a genus of crabs that live in the northern Pacific and Atlantic Oceans.

Other names for crabs in this genus include "queen crab" (in Canada) and "spider crab" – they are known by different names in different areas of the world. The generic name Chionoecetes means snow (χιών, chion) inhabitant (οἰκητης, oiketes); opilio means shepherd, and C. opilio is the primary species referred to as snow crab. Marketing strategies, however, employ snow crab for any species in the genus Chionoecetes. The name "snow crab" refers to their being commonly found in cold northern oceans.

Snow crab are caught as far north as the Arctic Ocean, from Newfoundland to Greenland and north of Norway in the Atlantic Ocean, and across the Pacific Ocean, including the Sea of Japan, the Bering Sea, the Gulf of Alaska, Norton Sound, and even as far south as California for Chionoecetes bairdi.

In 2019 the Norwegian Supreme Court ruled that the species is considered a sedentary species living on the seabed, and thus governed by the United Nations Law of the Sea. 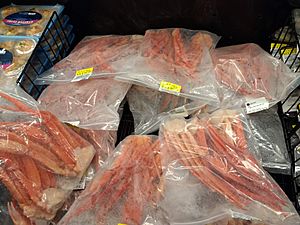 Bagged frozen snow crab legs for sale in a supermarket

Seven extant species are currently recognised in the genus:

Crabs are prepared and eaten as a dish in many different ways all over the world. The legs are usually served in clusters and are steamed, boiled, or grilled. Snow crab can also be used as an ingredient in other dishes such as snow crab macaroni and cheese.

All content from Kiddle encyclopedia articles (including the article images and facts) can be freely used under Attribution-ShareAlike license, unless stated otherwise. Cite this article:
Chionoecetes Facts for Kids. Kiddle Encyclopedia.