Chionoecetes opilio, is a species of snow crab, also known as opilio crab or opies, is a predominantly epifaunal crustacean native to shelf depths in the northwest Atlantic Ocean and north Pacific Ocean. It is a well-known commercial species of Chionoecetes, often caught with traps or by trawling. Seven species are in the genus Chionoecetes, all of which bear the name "snow crab". C. opilio is related to C. bairdi, commonly known as the tanner crab, and other crab species found in the cold, northern oceans.

Snow crabs have equally long and wide carapaces, or protective shell-coverings, over their bodies. Their tubercles, or the bodily projections on their shells, are moderately enclosed in calcium deposits, and they boast hooked setae, which are rigid, yet springy, hair-like organs on their claws. Snow crabs have a horizontal rostrum at the front of the carapace; the rostrum is basically just an extension of the hard, shell covering of the carapace and it boasts two flat horns separated by a gap. They have triangular spines and well-defined gastric and branchial regions internally. Snow crabs also have little granules along the border of their bodies, except their intestinal region. Concerning their walking legs, their first three are compressed; their chelipeds, or pincers, are usually smaller, shorter, or equal to their walking legs. Snow crabs are iridescent and range in color from brown to light red on top and from yellow to white on the bottom, and are bright white on the sides of their feet.

In 1996, they were recorded in the Barents Sea for the first time. They are considered an invasive species there, but how they arrived there is unclear. Another commercially important species, introduced deliberately to the same region, the red king crab, already has established itself in Barents Sea. Similarly, snow crabs likely will have an adverse effect on the native species of the Barents Sea.

C. opilio crabs eat other invertebrates in the benthic shelf, such as crustaceans, bivalves, brittle stars, polychaetes, and even phytobenthos and foraminiferans. Snow crabs also are scavengers, and aside from preying on other benthic shelf invertebrates, they prey on annelid worms and mollusks. Males typically prove to be better predators than mature females, and prey type depends upon predator size, with the smallest crabs feeding mainly on amphipods and ophiuroids, while the largest crabs feed mainly on annelids, crustacean decapods, and fish. Cannibalism is practised at times among snow crabs, most frequently by intermediate-sized females. 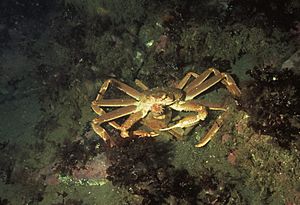 The snow crab grows slowly and is structured according to its size. At least 11 stages of growth for male crabs are recognized. Usually, the male crabs are almost twice the size of the female crabs. Males can grow up to 16.5 cm (6.5 in) in carapace width, while females can grow up to 9.5 cm (3.7 in). Male carapaces are usually about 7 cm (2.8 in) in width and length, with the female carapace usually close to 5.5 cm (2.2 in) in width and length. Males caught in commercial fisheries generally weigh 0.5–1.35 kg (1.1–3.0 lb) and females generally about 0.5 kg (1.1 lb).

Off the coast of Newfoundland, two amphipod species – Ischyrocerus commensalis and Gammaropsis inaequistylis – have been found to live on the carapace of the snow crab.

Snow crabs have a very high reproductive potential; each year, every female carries eggs. Females are fertilised internally and can carry up to 150,000 eggs under their abdomens after mating. Females usually lay their eggs in very deep areas of the ocean, such as in deposits of phytodetritus. Males also are capable of mating at both immature and mature stages of their lives.

Adult snow crabs usually live to 5-6 years. Before their deaths, they usually moult, mate a final time, and die. New snow crab offspring hatch along with the late spring phytoplankton bloom, so they have an ample food source to take advantage of upon hatching. When they hatch, they are in the zoeal stage, meaning that they are developing into larvae that can swim on their own. Then, they metamorphose into the megalopa stage and settle to the ocean floor among the phytodetritus.

This species of crab was commonly caught by trappers in the 1980s, but trapping has decreased since then. Much of the trapping has been in Canada for commercial use. The first commercial fishing for the species in the Barents Sea (where it is an invasive species) began in 2013, and the stock of this region likely will reach levels similar to eastern Canada in the future.

Since 2016, the snow crab is at the center of a dispute over fishing rights between Norway and the EU. The EU is of the view that the crab can be freely caught by EU fishers in the international waters in the Barents Sea. Norway, for its part, argues that the crab is not a fish but a sedentary species, and therefore subject to the jurisdiction Norway exercises over the continental shelf. The Norwegian Supreme Court adopted this view in a 2019 decision.

As the genus Cancer was divided up, the species C. opilio was transferred to a new genus, Chionoecetes by Henrik Nikolai Krøyer in 1838. C. opilio was the only species in the genus at first, so it is the type species.

All content from Kiddle encyclopedia articles (including the article images and facts) can be freely used under Attribution-ShareAlike license, unless stated otherwise. Cite this article:
Chionoecetes opilio Facts for Kids. Kiddle Encyclopedia.