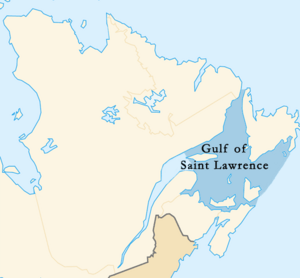 The Gulf of Saint Lawrence

The gulf is bounded on the north by the Labrador Peninsula, to the east by Newfoundland, to the south by the Nova Scotia peninsula and Cape Breton Island, and to the west by the Gaspé and New Brunswick. It has Anticosti Island, Prince Edward Island, and the Magdalen Islands.

The gulf flows into the Atlantic Ocean through the following outlets:

St. Paul Island, Nova Scotia, off the northeast tip of Cape Breton Island, is called the "Graveyard of the Gulf" for its many shipwrecks. Getting to the island is controlled by the Canadian Coast Guard.

Bonaventure Island on the eastern tip of the Gaspé Peninsula, Île Brion and Rochers-aux-Oiseaux (Bird Rock) northeast of the Magdalen Islands are important migratory bird sanctuaries. They are administered by the Canadian Wildlife Service.

All content from Kiddle encyclopedia articles (including the article images and facts) can be freely used under Attribution-ShareAlike license, unless stated otherwise. Cite this article:
Gulf of Saint Lawrence Facts for Kids. Kiddle Encyclopedia.