Kids Encyclopedia Facts
This page is about the river in Newfoundland, Canada. For other uses, see Humber River (disambiguation). 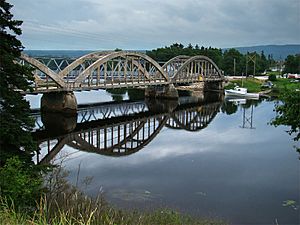 Nicholsville Bridge over the Humber 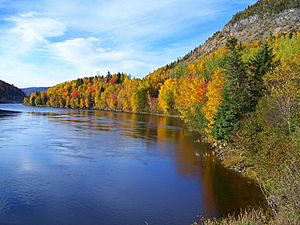 Autumn on the Humber

The Humber River is a river on Newfoundland in the Canadian province of Newfoundland and Labrador. It is approximately 120 kilometres long; it flows through the Long Range Mountains, southeast then southwest, through Deer Lake, to the Bay of Islands at Corner Brook. It begins near the town of Hampden. Taylor's Brook, Aidies Stream and Dead Water Brook run into the upper Humber. The Humber is one of Newfoundland's longest rivers.

James Cook first charted the Humber in the summer of 1767. It was named for its English counterpart the Humber (estuary).

The Humber is rich in Atlantic Salmon, and was from the 1800s used as a waterway for European trappers and loggers. It is one of the world's best recreational salmon fishing rivers.

All content from Kiddle encyclopedia articles (including the article images and facts) can be freely used under Attribution-ShareAlike license, unless stated otherwise. Cite this article:
Humber River (Newfoundland and Labrador) Facts for Kids. Kiddle Encyclopedia.