Located on the Bay of Islands at the mouth of the Humber River, the city is the second-largest population centre in the province behind St. John's, and smallest of three cities behind St. John's and Mount Pearl. As such, Corner Brook functions as a service centre for western and northern Newfoundland. It is located on the same latitude as Gaspé, Quebec, a city of similar size and landscape on the other side of the Gulf of St. Lawrence. Corner Brook is the most northern city in Atlantic Canada.

It is the administrative headquarters of the Qalipu Mi'kmaq First Nations band government. The Mi'kmaq name for the nearby Humber River is "Maqtukwek".

The area was surveyed by Captain James Cook in 1767. The Captain James Cook Historic Site stands on Crow Hill overlooking the city. By the middle of the 19th century the population of Corner Brook was less than 100, and the inhabitants were engaged in fishing and lumber work. 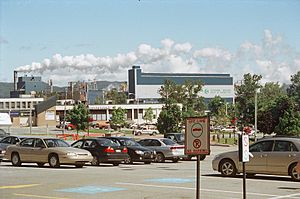 Corner Brook is home to the Corner Brook Pulp & Paper Mill (owned by Kruger Inc.), which is a major employer for the region. The city has the largest regional hospital in western Newfoundland. It also has a wide array of shopping and retail businesses and federal and provincial government offices. It is also home to Grenfell Campus, Memorial University, as well as campuses of Academy Canada and College of the North Atlantic. Corner Brook is also home to the province's newest high school, Corner Brook Regional High, which is an amalgamation of the former Regina and Herdman Collegiate high schools. 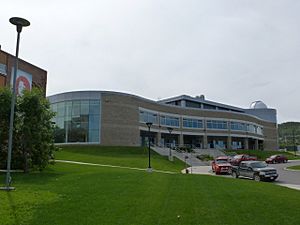 The Arts and Science building of Grenfell Campus, Corner Brook

Corner Brook is home to Grenfell Campus, Memorial University where a strong and vivacious arts community exists both within the school and well into the public. Corner Brook Arts and Culture Centre among other institutions thrive in promoting the arts on all levels from visual arts to theatre and well beyond.

Corner Brook is home to Stage West Theatre Festival, a summer theatre festival running through the month of July, and Gros Morne Summer Music, a classical music festival that spans July and August.

The March Hare literary festival occurs every March and celebrates poetry and written works from around the world, featuring poets from around Newfoundland and Labrador, Canada, and the world. Atlantic Canada's largest poetry festival was founded in the late 1980s by poet and playwright Al Pittman, and Corner Brook author, historian Rex Brown.

In April, the April Rabbit showcases new and young writers.

Corner Brook is also home to the region's only community radio station, Bay of Islands Radio (CKVB-FM). Presently broadcasting through the internet only, on October 6, 2016 the station received its broadcast license from the Canadian Radio-television and Telecommunications Commission to begin transmitting on 100.1 FM. The station is currently awaiting funding to proceed with the FM signal. The radio station is located on Brook Street, in the city's downtown district. 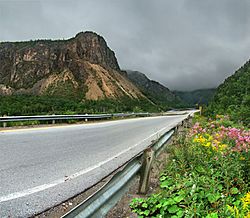 Along the Trans-Canada Highway

Route 1, the Trans-Canada Highway, passes the south side of the city on a high ridge before descending to the east, into the Humber Valley.

Corner Brook has a humid continental climate typical of most of Newfoundland. It is warmer in summer than St. John's due to less maritime exposure, whereas winters are colder than in the provincial capital. In terms of its overall climate, it is quite maritime, especially taking into account how the climate is in mainland Canada on similar latitudes. Precipitation is heavy year-round, resulting in heavy snowfall in winter.

The Corner Brook Royals currently play in the West Coast Senior Hockey League and were the winners of the 1986 National Title, the Allan Cup. The Royals play their home games at the Corner Brook Civic Centre, formerly the Canada Games Centre. The arena was built in 1997 and was one of the main venues used when the city of Corner Brook hosted the 1999 Canada Games.

Corner Brook was host of the Special Olympics Provincial Winter Games in February, 2011. The city also twice hosted Raid the North Extreme, a televised 6-day multi-sport expedition race held in wilderness locations across Canada, and was a leg of the ITU World Cup Triathlon.

All content from Kiddle encyclopedia articles (including the article images and facts) can be freely used under Attribution-ShareAlike license, unless stated otherwise. Cite this article:
Corner Brook Facts for Kids. Kiddle Encyclopedia.