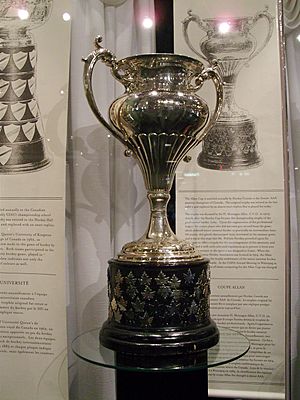 The Allan Cup on display at the Hockey Hall of Fame

The Allan Cup is the trophy awarded to the national senior amateur men’s ice hockey champions of Canada. The trophy was donated in 1908 by Sir H. Montagu Allan as a trophy for amateur teams, to replace the Stanley Cup, whose tournament had become a professional competition.

Only listed are the final champions of the season, some teams may have carried the Allan Cup through winning challenges halfway through these seasons, but finishing the season with the trophy is what counted. For those teams who did not finish the season with the cup, they can be viewed by looking at articles for the first few Allan Cups.

Most Championships by Province

This is a list of champions by province, territory, or state. Since 1909, the Allan Cup has been awarded 101 times.

(*) Saskatchewan totals include championships won by teams from Lloydminster.

All content from Kiddle encyclopedia articles (including the article images and facts) can be freely used under Attribution-ShareAlike license, unless stated otherwise. Cite this article:
Allan Cup Facts for Kids. Kiddle Encyclopedia.