Kids Encyclopedia Facts
Not to be confused with Brentford, England.

Brantford (2016 population 97,496; CMA population 134,203) is a city in southwestern Ontario, Canada, founded on the Grand River. It is the seat of Brant County, but it is politically separate with a government independent of the county.

Brantford is sometimes known as the "Telephone City": former city resident Alexander Graham Bell invented the telephone at his father's home, the Bell Homestead. In 1876 he conducted the first long-distance telephone call, making it from Brantford to Paris, Ontario.

Brantford is also the birthplace of hockey player Wayne Gretzky, comedian Phil Hartman, as well as Group of Seven member Lawren Harris. Brantford is named after Joseph Brant, an important Mohawk chief during the American Revolutionary War and later, who led his people in their first decades in Upper Canada. Many of his and other First Nations citizens live on the neighbouring reserve of Six Nations of the Grand River First Nation, the most populous reserve in Canada. 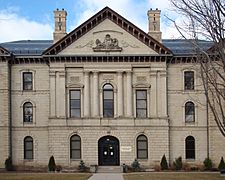 The Iroquoian-speaking Attawandaron, known in English as the Neutral Nation, lived in the Grand River valley area before the 17th century; their main village and seat of the chief, Kandoucho, was identified by 19th-century historians as having been located on the Grand River where present-day Brantford developed. This town, like the rest of their settlements, was destroyed when the Iroquois declared war in 1650 over the fur trade and exterminated the Neutral nation.

In 1784, Captain Joseph Brant and the Six Nations Indians of the Iroquois Confederacy left New York State for Canada. As a reward for their loyalty to the British Crown, they were given a large land grant, referred to as the Haldimand Tract, on the Grand River. The original Mohawk settlement was on the south edge of the present-day city at a location favourable for landing canoes. Brant's crossing of the river gave the original name to the area: Brant's ford. By 1847, European settlers began to settle further up the river at a ford in the Grand River and named their village Brantford. The Mohawk Chapel, built in the original Mohawk settlement, is Ontario's oldest Protestant church. Brantford was incorporated as a city in 1877.

The history of the Brantford region from 1793 to 1920 is described at length in the book At The Forks of The Grand.

In the late 19th and early 20th centuries, both the United States and Canadian governments encouraged education of First Nations children at Indian boarding schools, which were intended to teach them English and European-American ways and assimilate them to the majority cultures. These institutions in Western New York and Canada included the Thomas Indian School, Mohawk Institute Residential School (also known as Mohawk Manual Labour School and Mush Hole Indian Residential School) in Brantford, Southern Ontario, Haudenosaunee boarding school, and the Carlisle Indian Industrial School in Carlisle, Pennsylvania. Decades later and particularly since the late 20th century, numerous scholarly and artistic works have explored the detrimental effects of the schools in destroying Native cultures. Examples include: the film Unseen Tears: A Documentary on Boarding School Survivors, Ronald James Douglas' graduate thesis titled Documenting Ethnic Cleansing in North America: Creating Unseen Tears, and the Legacy of Hope Foundation's online media collection: "Where are the Children? Healing the Legacy of the Residential Schools".

Brantford's First Nations and European-Canadian development began in the 18th century with the arrival of the Six Nations tribes from New York State, and the later arrival of colonists and European immigrants. A number of historic monuments have been erected within the city marking those events and Brantford's contributions to the Commonwealth's defense of the realm.

Among the Anglo-Canadian residents were Alexander Graham Bell and his family, whose first residence in North America was a farmhouse on Tutela Heights (named after the First Nations tribe which settled the area and later absorbed into Brantford.) Bell invented the telephone here in July 1874, later building his first working model in Boston. He developed early improvements to it in 1876.

As part of the invention and development of the telephone, Canada's first telephone factory was built here, and the city was called "Brantford, The Telephone City". Associated with those events in the present day are the Bell family's museum home on Tutela Heights Road, Melville House, now called the Bell Homestead National Historic Site, and the Bell Telephone Memorial (below), dedicated by the Governor General of Canada in 1917 to mark the invention of the telephone in Brantford. 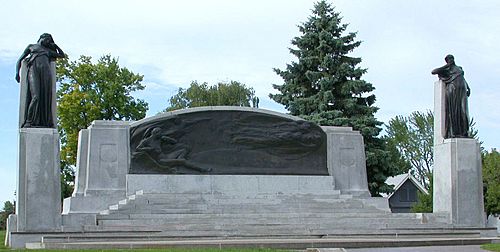 The Bell Telephone Memorial, commemorating the invention of the telephone by Alexander Graham Bell. The monument, paid by public subscription and sculpted by W.S. Allward, was dedicated by the Governor General of Canada, Victor Cavendish, 9th Duke of Devonshire with Dr. Bell in The Telephone City's Alexander Graham Bell Gardens in 1917. Included on the main tableau are figures representing "Man, the Inventor," "Inspiration whispering to Man, his power to transmit sound through space," as well as "Knowledge, Joy, Sorrow." Courtesy: Brantford Heritage Inventory

Brantford generated controversy in 2010 when its city council took the controversial step of expropriating and demolishing 41 historic downtown buildings on the south side of its main street, Colborne Street. These buildings constituted one of the longest blocks of pre-Confederation architecture in Canada. Included in the list of demolitions were one of Ontario's first grocery stores and an early 1890s office of the Bell Telephone Company of Canada, now Bell Canada. This decision was highly controversial and was widely criticized by Ontario's heritage preservation community. 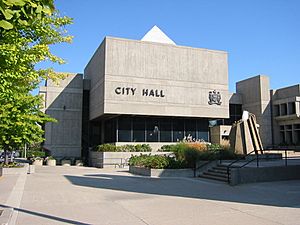 At the federal and provincial levels of government, Brantford is part of the Brant riding.

The current Brantford City Council was elected in the 2014 municipal election and is headed by Mayor Chris Friel, who had previously served as mayor from 1994 to 2003 and was re-elected in 2010. The council, in addition to Friel, includes Larry Kings and Rick Weaver (Ward 1), John Sless and John Utley (Ward 2), Greg Martin and Dan McCreary (Ward 3), Richard Carpenter and Cheryl Antoski (Ward 4), and David Neumann and Brian Van Tilborg (Ward 5). 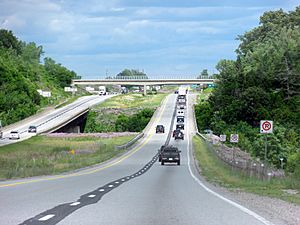 Highway 403 connects Brantford with Woodstock and Hamilton. Seen here is the 403 eastbound near the Grand River bridge.

The train station is located just north of downtown Brantford. Via Rail has daily passenger trains on the Quebec City-Windsor Corridor. Trains also stop at Union Station in Toronto.

Street rail began in Brantford in 1886 with horse-drawn carriages; by 1893 this system had been converted to electric. The City of Brantford took over these operations in 1914. Around 1936 it began to replace the electric street car system with gas-run buses, and by the end of 1939 the change-over was complete. 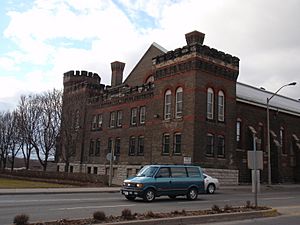 Annual events include the "Brantford International Villages Festival" in July; the "Brantford Kinsmen Annual Ribfest" in August; the "Chili Willy Cook-Off" in February; the "Frosty Fest", a Church festival held in winter;

Brantford has a casino, Brantford OLG Casino. The Sanderson Centre for the Performing Arts is a local performance venue. 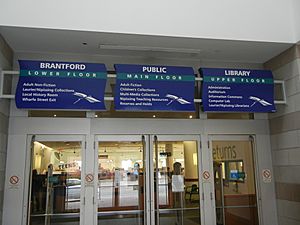 The main entrance to the Brantford Public Library

Brantford Public Library's central branch is located downtown on Colborne Street. It has an additional branch on St. Paul Avenue. It has been automated since 1984. In 2000, the library was the first in North America to join the UNESCO model library network.

Brantford is twinned with:

All content from Kiddle encyclopedia articles (including the article images and facts) can be freely used under Attribution-ShareAlike license, unless stated otherwise. Cite this article:
Brantford Facts for Kids. Kiddle Encyclopedia.