Southern Ontario is a primary region of the province of Ontario, Canada, the other primary region being Northern Ontario. It is the most densely populated and southernmost region in Canada. The exact northern boundary of Southern Ontario is disputed; however, the core region is situated south of Algonquin Park, the latter being in an area of transition between coniferous forest north of the French and Mattawa Rivers and southern deciduous forest. It covers between 14 and 15% of the province, depending on the inclusion of the Parry Sound and Muskoka districts which also lie in the transitional area between northern and southern forest regions. With approximately 13.5 million people, the region is home to approximately 36% of Canada's population of 37.0 million.

Southern Ontario can be distinguished from Northern Ontario because it is far more densely populated and contains the majority of the province's cities, major roads, and institutions. Northern Ontario, in contrast, contains more natural resources and remote wilderness. Although it has no saltwater coastline, the region has an abundance of freshwater coastlines on three Great Lakes (Huron, Erie and Ontario), as well as smaller lakes such as Lake Simcoe and Lake St. Clair. It is a major vineyard region and producer of Canadian wines.

While Southern Ontario has been a part of the province of Ontario since its establishment at Confederation in 1867, previously forming the colony of Upper Canada, a large portion of Northern Ontario did not become part of Ontario until 1912. 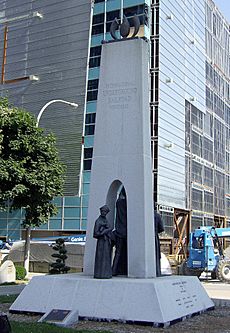 Territorial Southern Ontario was explored and colonized by the French in the 17th century, who forged relations with the Wyandot Huron people, based around the Georgian Bay/Lake Simcoe area. Other Iroquoian speaking people to the south were the Petun and Neutral Nation, and further northeast, Algonquins inhabited the upper Ottawa River/Madawaska Valley areas and the Mississaugas moved south from northern Lake Huron, settling lands in both the Kawartha region and just west of Toronto.

Following the Seven Years' War, the British wrested control of Southern Ontario, and greater colonization efforts were spurred on by the arrival of United Empire Loyalists brought on by the American Revolution.

Southern Ontario was where a large portion of the battles took place during the War of 1812, and was a major destination for escaping slaves using the underground railroad.

Following the enactment of Prohibition in the United States in 1919, Southern Ontario immediately became a hotbed of smuggling alcohol (spirit) across the border.

Southern Ontario is home to over 94%, or 12.1 million, of Ontario's total population of 12.9 million people (and about 35% of Canada's total population), compared to approximately 750,000 in Northern Ontario. This is due to many factors, including the more arable land in the south, its more moderate climate, well-used transportation (water, land and air) routes, proximity to populated areas of the Northeastern and Midwestern United States, as well as a long history of early European settlers and colonialism.

For thousands of years, Ontario has been home to indigenous aboriginal communities, with numerous nations with differing languages at the time of European contact. Over 200,000 aboriginal Canadians live in Southern Ontario today.

Southern Ontario was colonized by the French and the British. After the area began to be developed for European settlement, especially after the American Revolutionary War, other European immigrants arrived as well, with increased immigration in the late 19th and early 20th centuries. Since the late 20th century, many immigrants have come from Asia and other parts of the world. The region is one of the top destinations for immigrants worldwide, particularly the Greater Toronto Area. 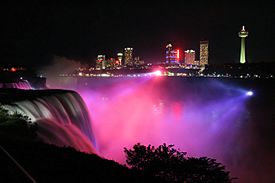 Southern Ontario has many beautiful natural attractions as well. Wasaga Beach, Grand Bend, Sauble Beach, and Sandbanks are beaches along the Great Lakes. The Niagara Escarpment offers hiking, skiing, and hundreds of waterfalls, including Niagara Falls. The Ottawa River has world-class white-water rafting which attracts rafters and kayakers from all over the globe. Ontario Parks governs all provincial parks, and Parks Canada governs all national parks.

Southern Ontario contains the only city in the nation from which one can travel north to the contiguous United States: Detroit, Michigan is north of Windsor, Ontario.

Statistics Canada's measure of a "metro area", the Census Metropolitan Area (CMA), roughly bundles together population figures from the core municipality with those from "commuter" municipalities. Note: A city's Metropolitan area may actually be larger than its CMA. For example; Oshawa is part of the Greater Toronto Area, however it is considered its own CMA. 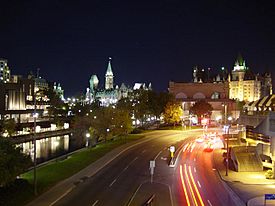 The region is broken up into 40 census divisions, including 22 counties, eight regional municipalities, nine single-tier municipalities and depending on its inclusion, one district. The line between the counties and regions of the south and the districts of the north forms the boundary between Southern and Northern Ontario.

1 Muskoka and Parry Sound are commonly regarded as a transitional region between Southern and Northern Ontario. Both divisions may be regarded as northern districts geographically, culturally and politically in some contexts.

The 2011 census revealed that the major urban divisions of York, Halton, Peel and Ottawa had the largest growth. While the heavy industrial divisions of Chatham, Lambton, and Essex, as well as the mainly recreational divisions of Huron and Prince Edward had a decrease in population.

Southern Ontario shares much of its culture with the nearby northeastern United States. Many notable Canadians have been born in Southern Ontario, owing to its nature as Canada's largest concentration of population. Toronto is notable for its multiculturalism and cosmopolitan nature: it has been called the most diverse city in the world. Southern Ontario also features in the literary genre of Southern Ontario Gothic, a major strand in Canadian literature. 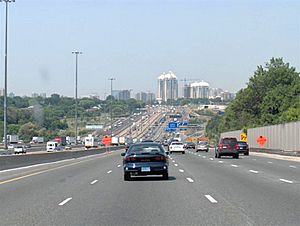 Highway 401 at the Don Valley Parkway in Toronto 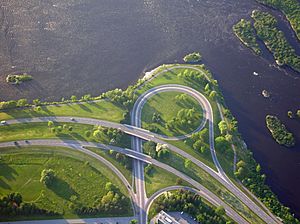 Southern Ontario has a highly developed transport system including many highways, airports, ports, trains and buses. The freeway system in Southern Ontario is referred to as the King's highways system, or the 400 series highways. The freeways are digitally monitored by the Ministry of Transportation (Ontario) using the COMPASS-Freeway Traffic Management System With the long-awaited upgrade of Highway 406, all the freeways in Ontario are at least 4 lanes wide, fully controlled with interchanges and divided. The major freeways are 400, 401, 402, 403, 404, 405, 406, 407 (Toll), 409, 410, 412 (Toll), 416, 417, 418 (Toll), 420, 427, Don Valley Parkway, Gardiner Expressway, Queen Elizabeth Way, Queensway, Lincoln M. Alexander Parkway, Red Hill Valley Parkway, Conestoga Parkway, and the E. C. Row Expressway.

The region has a long history of marine transportation, with hundreds of millions of tonnes of cargo moving along the Great Lakes, and Saint Lawrence Seaway each year. The Welland Canal is a vital part of the Great Lakes Waterway allowing ships to avoid Niagara Falls. The St. Clair River and Detroit River are also well travelled rivers between Lake Huron and Lake Erie in the Windsor, Sarnia area. Major, regional ports include the Port of Hamilton and Port of Windsor with smaller ports in Oshawa, Toronto, Goderich and Sarnia. Southern Ontario also has thousands of other fresh water lakes and rivers, as well as the Trent-Severn Waterway and Rideau Canal.

An inter-city train service in the region is provided mainly by Via Rail. The Greater Toronto area also has a commuter train system called the GO Train, which is supplemented by a network of bus services. 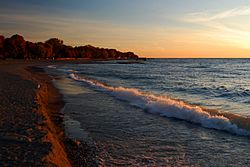 Harsh weather is not uncommon in the region, in the early summer months Southern Ontario is sometimes victim to tornadoes but far more often, straight line wind damage, hail and localized flooding from severe thunderstorms. Although the majority of tornadoes rarely cause excessive damage, the region is on the periphery of Tornado Alley and (F4) tornadoes touchdown every few decades causing widespread damage. Southern Ontario also gets hurricane remnants, floods, ice storms, heavy fog, hail, and blizzards.

Small earthquakes occur in the region. The Mw 5.8 Cornwall–Massena earthquake occurred in 1944 and had a maximum Mercalli intensity of VII (Very strong).

Many tourists visit the area in the autumn months to look at the bright vibrant colours of fall foliage.

The region has the most fresh water beaches in the nation. With relatively warm waters by mid-summer due to the hot and humid summer months and significant coastlines with white sand, the major beaches in the region are visited by millions of tourists every summer. The most popular beaches are Wasaga Beach, Grand Bend, Sauble Beach, and Sandbank.

The area has a large manufacturing sector. Since the mid-2000s, Ontario has produced more vehicles per year than the state of Michigan. In a cross-border definition, a swath of Southern Ontario could be considered a part of the Rust Belt. Factory closings because of industry restructuring, globalization (corresponding movement of jobs overseas and to non-unionized labour markets in the United States) have for the past few decades taken their toll. This is most evident in the region's southern tier cities which have large automobile or associated industrial bases, such as Windsor, London, St. Thomas and St. Catharines. Still affected by these factors but to a lesser extent is Hamilton, the centre of steel production, and Sarnia, the centre of petrochemical production. The province's two largest cities, Toronto and Ottawa, have moved increasingly to a service and knowledge economy. Toronto, is home to the country's financial sector, including the major Canadian banks and Toronto Stock Exchange. Ottawa, the national capital, is home to the Government of Canada and most government departments and agencies, in addition to having a strong technology sector.

Some parts of Southern Ontario are heavily entwined with bordering cities in New York and Michigan in terms of industry and people. The focus areas are the Buffalo–Niagara, Sarnia and Detroit–Windsor. Many people work and live on opposite sides of the border. The NEXUS program for frequent travelers across the border is increasing in popularity among bordering communities. Other areas with heavy trade traffic with Southern Ontario include Montreal and the province of Quebec, parts of northern Ohio, and western Pennsylvania.

All content from Kiddle encyclopedia articles (including the article images and facts) can be freely used under Attribution-ShareAlike license, unless stated otherwise. Cite this article:
Southern Ontario Facts for Kids. Kiddle Encyclopedia.