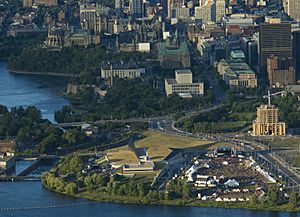 The National Capital Region is the official federal name for the area around Ottawa, Ontario. Ottawa is the national capital of Canada. The region includes the city of Gatineau in Quebec and the Census Metropolitan Area (CMA) which surrounds the two cities. Some people think the National Capital Region should be formed into a separate capital district like other countries.

The National Capital Region covers an area of 6,287.03 square kilometres (2,427.44 square miles). It has a population of 1,235,324. The Ottawa part of the region is part of the eastern subregion of Ontario. The Ottawa-Gatineau CMA is the only CMA in Canada to include parts of two provinces.

All content from Kiddle encyclopedia articles (including the article images and facts) can be freely used under Attribution-ShareAlike license, unless stated otherwise. Cite this article:
National Capital Region (Canada) Facts for Kids. Kiddle Encyclopedia.