Kids Encyclopedia Facts
This page is about the Canadian city. For other uses, see Gatineau (disambiguation).

Gatineau (/ˈɡætᵻnoʊ/, French pronunciation: [ɡatino]), officially Ville de Gatineau, is a city in western Quebec, Canada. It is the fourth largest city in the province after Montreal, Quebec City, and Laval. It is located on the northern bank of the Ottawa River, immediately across from Ottawa, together with which it forms Canada's National Capital Region. As of 2011 Gatineau had a population of 265,349, and a metropolitan population of 314,501. The Ottawa–Gatineau census metropolitan area had a population of 1,236,324.

Gatineau is coextensive with a territory equivalent to a regional county municipality (TE) and census division (CD) of the same name, whose geographical code is 81. It is the seat of the judicial district of Hull. 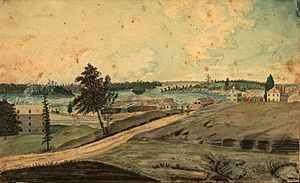 Hull, (Lower Canada), on the Ottawa River; at the Chaudier [sic] Falls, 1830 by Thomas Burrowes. Chaudière Falls and Bytown are visible in the background.

The current city of Gatineau is centred on an area called Hull, the oldest European colonial settlement in the National Capital Region. It was founded on the north shore of the Ottawa River in 1800 by Philemon Wright at the portage around the Chaudière Falls just upstream (or west) from where the Gatineau and Rideau Rivers flow into the Ottawa. Wright brought his family, five other families and twenty-five labourers and a plan to establish an agriculturally based community to what was then a mosquito-infested wilderness. But soon after, Wright and his family took advantage of the large lumber stands and became involved in the timber trade. The original settlement was called Wrightstown, later it became Hull and in 2002, after amalgamation, the City of Gatineau.

The Gatineau River, like the Ottawa River, was very much the preserve of the draveurs, people who would use the river to transport logs from lumber camps until they arrived downriver. (The Gatineau River flows south into the Ottawa River which flows east to the St Lawrence River near Montreal.) The log-filled Ottawa River, as viewed from Hull, appeared on the back of the Canadian one-dollar bill until it was replaced by a dollar coin (the "loonie") in 1987, and the very last of the dwindling activity of the draveurs on these rivers ended a few years later.

Ottawa was founded later, as the terminus of the Rideau Canal built under the command of Col. John By as part of fortifications and defences constructed after the War of 1812. Originally named Bytown, Ottawa did not become the Canadian capital until the mid-19th century after the original parliament in Montreal was torched by a rioting mob of English-speaking citizens on 25 April 1849. Its greater distance from the Canada–US border also left the new parliament less vulnerable to foreign attack.

Nothing remains of the original 1800 settlement; the downtown Vieux-Hull sector was destroyed by a terrible fire in 1900 which also destroyed the original pont des Chaudières (Chaudière Bridge), a road bridge which has since been rebuilt to join Ottawa to Hull at Victoria Island.

In the 1940s, during World War II, Hull, along with various other regions within Canada, such as the Saguenay–Lac-Saint-Jean, and Île Sainte-Hélène, had Prisoner-of-war camps. Hull's prison was simply labelled with a number and remained unnamed just like Canada's other war prisons. The prisoners of war (POWs) were sorted and classified into categories by nationality and civilian or military status. In this camp, POWs were mostly Italian and German nationals. During the Conscription Crisis of 1944 the prison eventually included Canadians who had refused conscription. Also, prisoners were forced into hard labour which included farming and lumbering the land.

During the 1970s and early 1980s, the decaying old downtown core of Hull was transformed by demolition and replacement with a series of large office complexes. Some 4,000 residents were displaced, and many businesses uprooted along what was once the town's main commercial area.

On 11 November 1992, Mrs. Ghislaine Chénier, Mayoress by interim for the city of Hull, unveiled 'War Never Again', a marble stele monument which commemorates the suffering caused by war to the men, women and children of the city of Hull.

As part of the 2000–06 municipal reorganization in Quebec, the five municipalities that constituted the Communauté urbaine de l'Outaouais were merged on 1 January 2002 to constitute the new city of Gatineau. They were:

Although Hull was the oldest and most central of the merged cities, the name Gatineau was chosen for the new city. The main reasons given were that Gatineau had more inhabitants, it was the name of the former county, the valley, the hills, the park and the main river within the new city limits: thus its name was less restrictive than Hull.

After the 2003 election, the new Liberal government of Jean Charest passed Bill 9, which created a process by which former municipalities could be reconstituted. Contrary to Charest's election promise of full de-amalgamation, Bill 9 only restored selected powers to the de-merged cities (e.g., animal control, garbage pickup, local street maintenance, some cultural facilities). The bigger expenses (e.g., police, fire, main streets, expansion programs) and the majority of the taxes remained in the hands of urban agglomerations, which are controlled by the central merged city because their larger populations give them greater voting weight. 10% of the eligible voters in each former municipality would have to sign a "register" in order to hold a referendum, with residents of Aylmer, Buckingham, Hull and Masson-Angers all surpassing this threshold. Upon holding a referendum, each would need a simple majority of "yes" votes, on a turnout of at least 35%, to de-merge. All of the above had the required turnout, with all rejecting the de-merger. 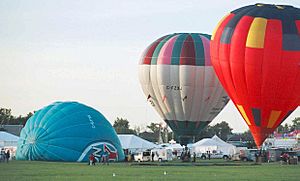 Filling the balloons in the park

Two important tourist attractions located in Gatineau are the Canadian Museum of History and the Casino du Lac-Leamy. In August, the Casino hosts an international fireworks competition which opposes four different countries with the winner being awarded a Prix Zeus prize for the best overall show (based on several criteria) and can return in the following year. At the beginning of September, on Labour Day weekend, Gatineau hosts an annual hot air balloon festival which fills the skies with colourful gas-fired passenger balloons.

There are many parks. Some of them are well gardened playgrounds or resting spaces while others, like Lac Beauchamp Park, are relatively wild green areas which often merge with the woods and fields of the surrounding municipalities. Streams of all sizes run through these natural expanses. Most of the city is on level ground but the Northern and Eastern parts lie on the beginnings of the foothills of the massive Canadian Shield, or Laurentian Mountains. These are the "Gatineau Hills", and are visible in the background of the companion picture. One of Gatineau's urban parks, Jacques Cartier Park, is used by the National Capital Commission during the popular festival, Winterlude.

Nightlife within the city of Gatineau is mostly centered in the "Vieux-Hull" sector behind the Federal office complexes of downtown. The area features many bars and restaurants within a stone's throw from Ottawa. It is a popular spot for young Ontarians as the legal drinking age in Quebec is 18 (as opposed to Ontario's 19).

The Gatineau-Ottawa Executive Airport is Gatineau's municipal airport, capable of handling small jets. There are Canada customs facilities for aircraft coming from outside Canada, a car rental counter and a restaurant. The airport has a few regularly scheduled flights to points within Quebec, but most residents of Gatineau use the nearby Ottawa Macdonald–Cartier International Airport or travel to Montréal–Pierre Elliott Trudeau International Airport in Montreal.

Ottawa and Gatineau have two distinct bus-based public transit systems with different fare structures, OC Transpo and the Société de transport de l'Outaouais. Tickets are not interchangeable between the two, however passes and transfers from one system to the other do not require payment of a surcharge on any routes.

Many Gatineau highways and major arteries feed directly into the bridges crossing over to Ottawa, but once there the roads lead into the dense downtown grid or into residential areas, with no direct connection to The Queensway. This difficulty is further magnified by the lack of a major highway on the Quebec side of the Ottawa River connecting Gatineau to Montreal, the metropolis of the province; most travellers from Gatineau to Montreal first cross over to Ottawa, and use Ontario highways to access Montreal. However, it is expected that since Autoroute 50 has been completed, the new link between Gatineau and the Laurentides popular tourist area may serve as part of a Montreal by-pass by the north shore for Outaouais residents.

The Gatineau Municipal Council (French: Le conseil municipal de Gatineau) is the city's main governing body. It is composed of 17 city councillors and a mayor.

According to the 2011 census the city of Gatineau had a population of 265,349. This was an increase of 9.6% compared to 2006. Most of the population live in the urban cores of Aylmer, Hull and the former Gatineau. Buckingham and Masson-Angers are more rural communities. Gatineau is the fourth largest city in Quebec after Montreal, Quebec City and Laval.

The Quebec part of Ottawa-Gatineau Census Metropolitan Area (CMA) — which includes various peripheral municipalities in addition to Gatineau — had a total population of 314,501.

The following statistics refer to the Quebec portion of the Ottawa – Gatineau CMA (as it was defined in the 2006 census):

(Percentages may total more than 100% due to rounding and multiple responses).

Immigration: The area is home to more than five thousand recent immigrants (i.e. those arriving between 2001 and 2006), who now comprise about two percent of the total population. 11% of these new immigrants have come from Colombia, 10% from China, 7% from France, 6% from Lebanon, 6% from Romania, 4% from Algeria, 3% from the United States and 3% from Congo.

The larger communities within Gatineau are:

All content from Kiddle encyclopedia articles (including the article images and facts) can be freely used under Attribution-ShareAlike license, unless stated otherwise. Cite this article:
Gatineau Facts for Kids. Kiddle Encyclopedia.