French Canadians (also Franco-Canadians) are a major North American ethnic group derived from the descendants of French colonists who arrived in New France (Canada) in the 17th and 18th centuries. Today, French Canadians constitute the main French-speaking population of Canada, accounted for about 20% of the total population of that country.

The French were the first Europeans to permanently colonize what is now Quebec, parts of Ontario, Acadia, and select areas of Western Canada, all in Canada (See French colonization of the Americas.) Their colonies of New France (also commonly called Canada) stretched across what today are the Maritime provinces, southern Quebec and Ontario, as well as the entire Mississippi River Valley.

The first permanent European settlements in Canada were at Port Royal in 1605 and Quebec City in 1608 as fur trading posts. The territories of New France were Canada, Acadia (later renamed Nova Scotia), and Louisiana. The inhabitants of Canada called themselves the Canadiens, and came mostly from northwestern France. The early inhabitants of Acadia, or Acadiens, came mostly but not exclusively from the Southwestern region of France. Canadien explorers and fur traders would come to be known as coureurs des bois, while those who settled on farms in Canada would come to be known as habitants. Many French Canadians are the descendants of the King's Daughters of this era. Many also are the descendants of mixed French and Algonquin marriages.

During the mid-18th century, French explorers and Canadiens born in French Canada colonized other parts of North America in what are today the states of Louisiana (called Louisianais), Mississippi; Missouri; Illinois; Vincennes, Indiana; Louisville, Kentucky; the Windsor-Detroit region and the Canadian prairies (primarily Southern Manitoba).

After the 1760 British conquest of New France in the French and Indian War (known as the Seven Years' War in Canada), the French-Canadian population remained important in the life of the colonies.

The British gained Acadia by the Treaty of Utrecht in 1713. In 1755, the beginning of the French and Indian War, the British—actually British Americans from Massachusetts—committed what historian John Mack Faragher calls the first genocide by devastating Acadia, deporting 75% of the Acadian population to other British colonies and France in a massive diaspora. Those Acadians deported to Southern colonies close to French Louisiana migrated there, creating "Cajun" culture. Beyond Acadia, French Canadians escaped this fate in part because of the capitulation act that made them British subjects. It took the 1774 Quebec Act for them to regain the French civil law system, and in 1791 French Canadians in Lower Canada were introduced to the British parliamentary system when an elected Legislative Assembly was created.

The Legislative Assembly having no real power, the political situation degenerated into the Lower Canada Rebellions of 1837–1838, after which Lower Canada and Upper Canada were unified. Some of the motivations for the union was to limit French-Canadian political power and at the same time transferring a large part of the Upper Canadian debt to the debt-free Lower Canada. After many decades of British immigration, the Canadiens became a minority in the Province of Canada in the 1850s.

French-Canadian contributions were essential in securing responsible government for The Canadas and in undertaking Canadian Confederation. However, over the course of the late 19th and 20th centuries, French Canadians' discontent grew with their place in Canada because of a series of events, including the execution of Louis Riel, the elimination of official bilingualism in Manitoba, Canada's participation in the Second Boer War, Regulation 17 which banned French-language schools in Ontario, the Conscription Crisis of 1917 and the Conscription Crisis of 1944.

Between the 1840s and the 1930s, some 900,000 French Canadians emigrated to the New England region. About half of them returned home. The generations born in the United States would eventually come to see themselves as Franco-Americans. During the same period of time, numerous French Canadians also emigrated and settled in Eastern and Northern Ontario. The descendants of those Quebec immigrants constitute the bulk of today's Franco-Ontarian community. 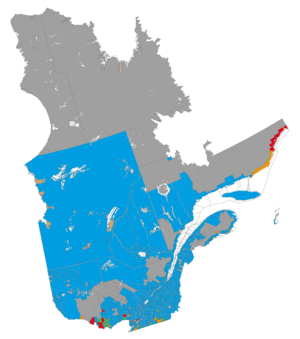 Since the 1960s, French Canadians in Quebec have generally used Québécois (masculine) or Québécoise (feminine) to express their cultural and national identity, rather than Canadien français and Canadienne française. Francophones who self-identify as Québécois and do not have French-Canadian ancestry may not identify as "French Canadian" (Canadien or Canadien français). Those who do have French or French-Canadian ancestry, but who support Quebec sovereignty, often find Canadien français to be archaic or even pejorative. This is a reflection of the strong social, cultural, and political ties that most Quebeckers of French-Canadian origin, who constitute a majority of francophone Quebecers, maintain within Quebec. It has given Québécois an ambiguous meaning which has often played out in political issues, as all public institutions attached to the provincial government refer to all Quebec citizens, regardless of their language or their cultural heritage, as Québécois. 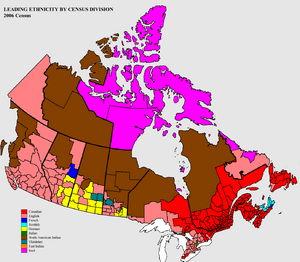 The emphasis on the French language and Quebec autonomy means that French-speakers across Canada may now self-identify as québécois(e), acadien(ne), or Franco-canadien(ne), or as provincial linguistic minorities such as Franco-manitobain(e), Franco-ontarien(ne) or fransaskois(e). Education, health and social services are provided by provincial institutions, so that provincial identities are often used to identify French-language institutions:

Acadians residing in the provinces of New Brunswick, Prince Edward Island and Nova Scotia represent a distinct francophone culture. This group's culture and history evolved separately from the French Canadian culture of Quebec, at a time when the Maritime Provinces were not part of what was referred to as Canada, and are consequently considered a distinct culture from French Canadians.

Brayons in Madawaska County, New Brunswick and Aroostook County, Maine may be identified with either the Acadians or the Québécois, or considered a distinct group in their own right, by different sources.

Distribution of French Americans in the United States

During the mid-18th century, French explorers and Canadiens born in French Canada colonized other parts of North America in what are today Louisiana (called Louisianais), Mississippi, Missouri, Illinois, Wisconsin, Indiana, Ohio, and the Upper Peninsula of Michigan as well as around Detroit. They also founded such cities as New Orleans and St. Louis and villages in the Mississippi Valley. French Canadians latter emigrated in large numbers from Canada to the United States between the 1840s and the 1930s in search of economic opportunities in border communities and industrialized portions of New England. French-Canadian communities remain along the Quebec border in northern Maine, Vermont and New Hampshire as well as further south in Massachusetts, Rhode Island, and southern New Hampshire. The wealth of Catholic churches named after St. Louis throughout New England is indicative of the French immigration to the area. They came to identify as Franco-American, especially those who were born American.

Distinctions between French Canadian, natives of France, and other New World French identities is more blurred in the U.S. than in Canada. In L'avenir du français aux États-Unis, Calvin Veltman finds that since the French language has been so widely abandoned in the United States, the term "French Canadian" is there understood in ethnic rather than linguistic terms. 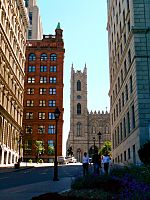 People who today claim some French-Canadian ancestry or heritage number some 7 million in Canada and 2.4 million people in the United States. (An additional 8.4 million Americans claim French ancestry; they are treated as a separate ethnic group by the U.S. Census Bureau.)

In Canada, 85% of French Canadians reside in Quebec where they constitute the majority of the population in all regions except the far North. Most cities and villages in this province were built and settled by the French or French Canadians during the French colonial rule.

There are various urban and small centres in Canada outside of Quebec that have long-standing populations of French Canadians, going back to the late 19th century. Eastern and Northern Ontario have large populations of francophones in communities such as Ottawa, Cornwall, Hawkesbury, Sudbury, Welland, Timmins and Windsor. Many also pioneered the Canadian Prairies in the late 18th century, founding the towns of Saint Boniface, Manitoba and in Alberta's Peace Country, including the region of Grande Prairie.

Canadian French is an umbrella term for the distinct varieties of French spoken by francophone Canadians: Québécois (Quebec French), Acadian French, Métis French, and Newfoundland French. Unlike Acadian French and Newfoundland French, the French of Ontario, the Canadian West, and New England all originate from what is now Quebec French and do not constitute distinct varieties from it, though there are some regional differences. French Canadians may also speak either Canadian English or American English.

In Quebec, about six million French Canadians are native French speakers. 599,225 (7.7% of population) are English-speaking, Anglophones or English-speaking Quebecers, and others are Allophones (literally "other-speakers", meaning, in practice, immigrants who speak neither French nor English at home). In the United States, assimilation to the English language was more significant and very few Americans of French-Canadian ancestry or heritage speak French today.

Six million of Canada's native French speakers, of all origins, are found in the province of Quebec, where they constitute the majority language group, and another one million are distributed throughout the rest of Canada. Roughly 31% of Canadian citizens are French-speaking and 25% are of French-Canadian descent. Not all French speakers are of French descent, and not all people of French-Canadian heritage are exclusively or primarily French-speaking.

Francophones living in Canadian provinces other than Quebec have enjoyed minority language rights under Canadian law since at least 1969, with the Official Languages Act, and under the Canadian Constitution since 1982, protecting them from provincial governments that have historically been indifferent towards their presence.

The pre-revolutionary kingdom of France forbade non-Catholic settlement in New France from 1629 onward and almost all French settlers of Canada were Roman Catholic. In the United States, some French Catholics have converted to Protestantism. Until the 1960s, religion was a central component of French-Canadian national identity. The Church parish was the focal point of civic life in French-Canadian society, and religious orders ran French-Canadian schools, hospitals and orphanages and were very controlling of every day life in general. During the Quiet Revolution of the 1960s, however, the practice of Catholicism dropped drastically. Church attendance in Quebec currently remains low. Rates of religious observance among French Canadians outside Quebec tend to vary by region, and by age. In general, however, those in Quebec are the least observant, while those in the United States of America and other places away from Quebec tend to be the most observant. There are also French Canadians who have Canadian citizenship and whose mother tongue is French whose families arrived in Canada over the last 75 years who are not Christian. There are many people from France, Lebanon, Morocco, Tunisia, and other countries whose mother tongue is French and are either Christian, Muslim or Jewish.

In English usage, the terms for provincial subgroups, if used at all, are usually defined solely by province of residence, with all of the terms being strictly interchangeable with French Canadian. Although this remains the more common usage in English, it is considered outdated to many Canadians of French descent, especially in Quebec. Most francophone Canadians who use the provincial labels identify with their province of origin, even if it is not the province in which they currently reside; for example, a Québécois who moved to Manitoba would not change his own self-identification to Franco-Manitoban.

Increasingly, provincial labels are used to stress the linguistic and cultural, as opposed to ethnic and religious, nature of French-speaking institutions and organizations. The term "French Canadian" is still used in historical and cultural contexts, or when it is necessary to refer to Canadians of French-Canadian collectively, such as in the name and mandate of a national organizations which serve minority francophone communities across Canada. Francophone Canadians of non-French-Canadian origin such as immigrants from francophone countries are not usually designated by the term "French Canadian"; the more general term "francophones" is used for French-speaking Canadians across all ethnic origins.

All content from Kiddle encyclopedia articles (including the article images and facts) can be freely used under Attribution-ShareAlike license, unless stated otherwise. Cite this article:
French Canadian Facts for Kids. Kiddle Encyclopedia.