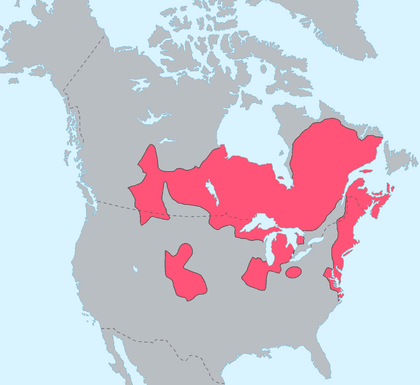 The Algonquian are one of the most populous and widespread North American native language groups. Today, thousands of individuals identify with various Algonquian peoples. Historically, the peoples were prominent along the Atlantic Coast and into the interior along the Saint Lawrence River and around the Great Lakes. This grouping consists of the peoples who speak Algonquian languages. 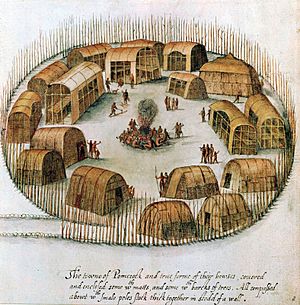 A 16th-century sketch of the Algonquian village of Pomeiock.

Before Europeans came into contact, most Algonquian settlements lived by hunting and fishing, although quite a few supplemented their diet by cultivating corn, beans and squash (the "Three Sisters"). The Ojibwe cultivated wild rice.

The Algonquians of New England (who spoke Eastern Algonquian) practiced a seasonal economy. The basic social unit was the village: a few hundred people related by a clan kinship structure. Villages were temporary and mobile. The people moved to locations of greatest natural food supply, often breaking into smaller units or gathering as the circumstances required. This custom resulted in a certain degree of cross-tribal mobility, especially in troubled times.

In warm weather, they constructed portable wigwams, a type of hut usually with buckskin doors. In the winter, they erected the more substantial longhouses, in which more than one clan could reside. They cached food supplies in more permanent, semi-subterranean structures.

In the spring, when the fish were spawning, they left the winter camps to build villages at coastal locations and waterfalls. In March, they caught smelt in nets and weirs, moving about in birch bark canoes. In April, they netted alewife, sturgeon and salmon. In May, they caught cod with hook and line in the ocean; and trout, smelt, striped bass and flounder in the estuaries and streams. Putting out to sea, they hunted whales, porpoises, walruses and seals. The women and children gathered scallops, mussels, clams and crabs, all the basis of menus in New England today.

From April through October, natives hunted migratory birds and their eggs: Canada geese, brant, mourning doves and others. In July and August they gathered strawberries, raspberries, blueberries and nuts. In September, they split into small groups and moved up the streams to the forest. There, they hunted beaver, caribou, moose and white-tailed deer.

In December, when the snows began, the people created larger winter camps in sheltered locations, where they built or reconstructed longhouses. February and March were lean times. The tribes in southern New England and other northern latitudes had to rely on cached food. Northerners developed a practice of going hungry for several days at a time. Historians hypothesize that this practice kept the population down, according to Liebig's law of the minimum. Northerners were food gatherers only.

The southern Algonquians of New England relied predominantly on slash and burn agriculture. They cleared fields by burning for one or two years of cultivation, after which the village moved to another location. This is the reason the English found the region relatively cleared and ready for planting. By using various kinds of native corn (maize), beans and squash, southern New England natives were able to improve their diet to such a degree that their population increased and they reached a density of 287 people per 100 square miles as opposed to 41 in the north.

At the time of the first European settlements in North America, Algonquian peoples occupied what is now New Brunswick, and much of what is now Canada east of the Rocky Mountains; what is now New England, New Jersey, southeastern New York, Delaware and down the Atlantic Coast through the Upper South; and around the Great Lakes in present-day Minnesota, Wisconsin, Michigan, Illinois, Indiana and Iowa. The homeland of the Algonquian peoples is not known. At the time of the European arrival, the hegemonic Iroquois Confederacy, based in present-day New York and Pennsylvania, was regularly at war with Algonquian neighbours.

The French and later English encountered the Maliseet of present-day Maine, Quebec and New Brunswick; the Abenaki of Quebec, Vermont and New Hampshire; the Mi'kmaw band governments of the Maritimes lived primarily on fishing. Further north are the Betsiamite, Atikamekw, Anishinaabe and Innu/Naskapi. The Beothuk of Newfoundland might have been Algonquians, but as their last known speaker died in the early 19th century, little record of their language or culture remains.

Colonists in the Massachusetts Bay area first encountered the Wampanoag, Massachusett, Nipmuck, Pennacook, Penobscot, Passamaquoddy, and Quinnipiac. The Mohegan, Pequot, Pocumtuc, Tunxis, and Narragansett were based in southern New England. The Abenaki were located in northern New England: present-day Maine, New Hampshire, and Vermont in what became the United States and eastern Quebec in what became Canada. They had established trading relationships with French colonists who settled along the Atlantic coast and what was later called the Saint Lawrence River. The Mahican was located in western New England many people died in the upper Hudson River Valley (around what was developed by Europeans as Albany, New York). These groups practiced agriculture, hunting and fishing.

The French encountered Algonquian peoples in this area through their trade and limited colonization of New France along the Mississippi and Ohio rivers. The historic peoples of the Illinois Country were the Shawnee, Illiniwek, Kickapoo, Menominee, Miami, Sauk and Meskwaki. The latter were also known as the Sac and Fox, and later known as the Meskwaki Indians, who lived throughout the present-day Midwest of the United States.

During the nineteenth century, many Native Americans from east of the Mississippi River were displaced over great distances through the United States passage and enforcement of Indian removal legislation; they forced the people west of the Mississippi River to what they designated as Indian Territory. After the US extinguished Indian land claims, this area was admitted as the state of Oklahoma in the early 20th century.

Ojibwe/Chippewa, Odawa, Potawatomi, and a variety of Cree groups lived in Upper Peninsula of Michigan, Western Ontario, Wisconsin, Minnesota, and the Canadian Prairies. The Arapaho, Blackfoot and Cheyenne developed as indigenous to the Great Plains.

All content from Kiddle encyclopedia articles (including the article images and facts) can be freely used under Attribution-ShareAlike license, unless stated otherwise. Cite this article:
Algonquian peoples Facts for Kids. Kiddle Encyclopedia.