As general terms, Indian Territory, the Indian Territories, or Indian country describe an evolving land area set aside by the United States Government for the relocation of Native Americans who held aboriginal title to their land. In general, the tribes ceded land they occupied in exchange for land grants in an area purchased by the United States federal government from Napoleonic France, the Louisiana Purchase. The concept of an Indian Territory was an outcome of the 18th- and 19th-century policy of Indian removal. After the Civil War, the policy of the government was one of assimilation.

The term Indian Reserve describes lands the British government set aside for indigenous tribes between the Appalachian Mountains and the Mississippi River in the time before the American Revolutionary War.

Indian Territory later came to refer to an unorganized territory whose general borders were initially set by the Indian Intercourse Act of 1834, and was the successor to Missouri Territory after Missouri received statehood. The borders of Indian Territory were reduced in size as various Organic Acts were passed by Congress to create incorporated territories of the United States. The 1907 Oklahoma Enabling Act created the single state of Oklahoma by combining Oklahoma Territory and Indian Territory, ending the existence of an Indian Territory. 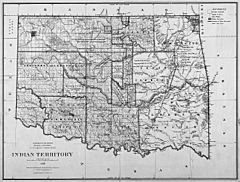 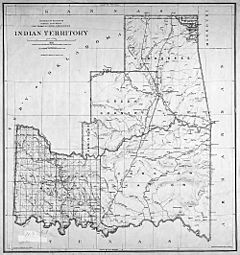 After the Civil War, the Southern Treaty Commission re-wrote treaties with tribes that sided with the Confederacy, reducing the territory of the Five Civilized Tribes and providing land to resettle Plains Indians and tribes of the Midwestern United States.

In time, the Indian Territory was reduced to what is now Oklahoma. The Organic Act of 1890 reduced Indian Territory to the lands occupied by the Five Civilized Tribes and the Tribes of the Quapaw Indian Agency (at the borders of Kansas and Missouri). The remaining western portion of the former Indian Territory became the Oklahoma Territory.

At the time of the American Revolution, many Native American tribes had long-standing relationships with British who were loyal to the British Empire, but they had a less-developed relationship with the Empire's colonists-turned-rebels. After the defeat of the British, the Americans twice invaded the Ohio Country and were twice defeated. They finally defeated the Indian Western Confederacy at the Battle of Fallen Timbers in 1794 and imposed the Treaty of Greenville, which ceded most of what is now Ohio, part of present-day Indiana, and the lands that include present-day Chicago and Detroit, to the United States federal government.

In 1803 the United States of America agreed to purchase France's claim to French Louisiana for a total of $15 million (less than 3 cents per acre). After the Louisiana Purchase in 1803, President Thomas Jefferson and his successors viewed much of the land west of the Mississippi River as a place to resettle the Native Americans, so that white settlers would be free to live in the lands east of the river. Indian removal became the official policy of the United States government with the passage of the 1830 Indian Removal Act, formulated by President Andrew Jackson.

All content from Kiddle encyclopedia articles (including the article images and facts) can be freely used under Attribution-ShareAlike license, unless stated otherwise. Cite this article:
Indian Territory Facts for Kids. Kiddle Encyclopedia.