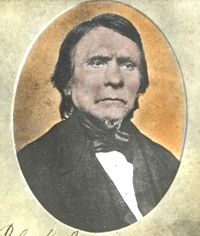 Delaware Nation (Delaware: Èhëliwsikakw Lënapeyokcode: del is deprecated ), also known as the Delaware Tribe of Western Oklahoma and sometimes called the Absentee or Western Delaware, based in Anadarko, Oklahoma is one of three federally recognized tribes of Delaware Indians in the United States, along with the Delaware Indians based in Bartlesville, Oklahoma and the Stockbridge–Munsee Community of Wisconsin. Communities also reside in Canada.

The nation's annual economic impact was estimated at $5 million in 2010. Their tribal casino, Gold River Bingo and Casino, is located north of Anadarko. In August 2012, the Delaware Nation opened Casino Oklahoma located in Hinton, OK.

The Lenape people were divided into three dialectal divisions, which later became the basis for the three Clans of the Lenape. These divisions were the Monsi (Munsee) or Wolf, the Unami or Turtle, and the Unilactigo or Turkey. Today the clans are known as the Tùkwsit (Wolf Clan), Pùkuwànko (Turtle Clan), and Pële (Turkey Clan). The Delaware Nation is the Pùkuwànko (Turtle Clan).

The Delaware Nation was the first Indian nation to enter into a treaty with the newly formed government of the United States; the treaty was signed on September 17, 1778.

The Oklahoma branches were established in 1867, with the purchase of land by Delaware from the Cherokee Nation; they made two payments totaling $438,000. A court dispute followed over whether the sale included citizenship rights for the Delaware within the Cherokee Nation. The Curtis Act of 1898 dissolved tribal governments and ordered the allotment of tribal lands to individual members of tribes. The Lenape fought the act in the courts but lost, and in 1867 the courts ruled that they had only purchased rights to the land for their lifetimes. The lands were allotted in 160-acre (650,000 m2) lots in 1907, with any land left over sold to non-Indians.

The tribe became federally recognized on July 5, 1958 as the "Delaware Tribe of Western Oklahoma." They ratified their current constitution in 1972. In November 1999, the tribe officially changed its name to the Delaware Nation.

In 2004 the Delaware of Oklahoma sued Pennsylvania over land lost in 1800. This was related to the colonial government's Walking Purchase of 1737, an agreement of doubtful legal veracity. The court held that the justness of the extinguishment of aboriginal title is nonjusticiable, including in the case of fraud. Because the extinguishment occurred prior to the passage of the first Indian Nonintercourse Act in 1790, that Act did not avail the Delaware.

As a result the court granted the Commonwealth's motion to dismiss. In its conclusion the court stated: ... we find that the Delaware Nation's aboriginal rights to Tatamy's Place were extinguished in 1737 and that, later, fee title to the land was granted to Chief Tatamy-not to the tribe as a collectivity.

All content from Kiddle encyclopedia articles (including the article images and facts) can be freely used under Attribution-ShareAlike license, unless stated otherwise. Cite this article:
Delaware Nation Facts for Kids. Kiddle Encyclopedia.