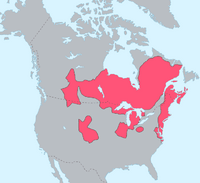 The Algonquian (also Algonquin, Algonkian) languages are a subfamily of Native American languages that includes most of the languages in the Algic language family The term "Algonquin" comes from the Maliseet word elakómkwik, "they are our relatives/allies". Many Algonquian languages are extremely endangered today, while a number of others have already died out completely.

Speakers of Algonquian languages stretch from the east coast of North America all the way to the Rocky Mountains. The language from which all of the languages of the family come was spoken at least 3,000 years ago.

All content from Kiddle encyclopedia articles (including the article images and facts) can be freely used under Attribution-ShareAlike license, unless stated otherwise. Cite this article:
Algonquian languages Facts for Kids. Kiddle Encyclopedia.