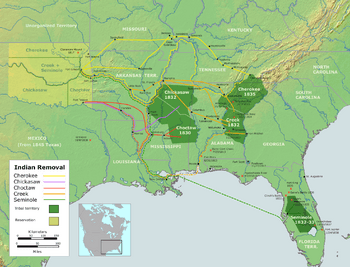 The Indian Removal Act resulted in the transplantation of several American Indian tribes and in the Trail of Tears.

The Indian Removal Act was a law in the United States that was passed in 1830. It became a law when President Andrew Jackson signed it. It gave the President the power to force Native American tribes to move to land west of the Mississippi River. Not all American citizens liked the law. Davy Crockett, a Congressman from Tennessee, hated the law. Some tribes signed treaties with the United States and moved; others fought with the government, including the Cherokee Nations, which was forced to march west in 1838. Their trip west is now called the "Trail of Tears".

All content from Kiddle encyclopedia articles (including the article images and facts) can be freely used under Attribution-ShareAlike license, unless stated otherwise. Cite this article:
Indian Removal Act Facts for Kids. Kiddle Encyclopedia.