The Cherokee (ah-ni-yv-wi-ya in Cherokee) are a people native to North America who at the time of European contact in the 16th century inhabited what is now the eastern and southeastern United States before most were forcefully moved to the Ozark Plateau. They were one of the tribes referred to as the Five Civilized Tribes.

The Cherokee Nation has more than 300,000 tribal members, making it the largest of the 567 federally recognized tribes in the United States. In addition, numerous groups claim Cherokee lineage, and some of these are state-recognized. A total of more than 819,000 people are estimated to have identified as having Cherokee ancestry on the U.S. census; most are not enrolled members of any tribe.

Of the three federally recognized Cherokee tribes, the Cherokee Nation and the UKB have headquarters in Tahlequah, Oklahoma, and most of their members live in the state. The UKB are mostly descendants of "Old Settlers", also called Western Cherokee: those who migrated from the Southeast to Arkansas and Oklahoma about 1817 prior to Indian Removal. They are related to the Cherokee who were later forcibly relocated there in the 1830s under the Indian Removal Act. The Eastern Band of Cherokee Indians is located on land known as the Qualla Boundary in western North Carolina. They are mostly descendants of ancestors who had resisted or avoided relocation, remaining in the area. Because they gave up tribal membership at the time, they became state and US citizens. In the late 20th century, they reorganized as a federally recognized tribe. 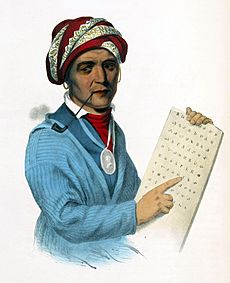 Sequoyah, the inventor of the Cherokee syllabary

The Cherokee speak an Iroquoian language which is polysynthetic and is written in a syllabary invented by Sequoyah.

Beginning at about the time of the American Revolutionary War (late 1700s), divisions over continued accommodation of encroachments by white settlers, despite repeated violations of previous treaties, caused some Cherokee to begin to leave the Cherokee Nation. These early dissidents would eventually move across the Mississippi River to areas that would later become the states of Arkansas and Missouri. Their settlements were established on the St. Francis and the White Rivers by 1800. Eventually, there were such large numbers of Cherokees in these areas the US Government established a Cherokee Reservation located in Arkansas, with boundaries from north of the Arkansas River up to the southern bank of the White River. Many of these dissidents became known as the Chickamauga. Led by Chief Dragging Canoe, the Chickamauga made alliances with the Shawnee and engaged in raids against colonial settlements. Other Cherokee leaders who lived in Arkansas were The Bowl, Sequoyah, Spring Frog and The Dutch. 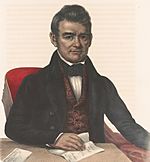 John Ross was an important figure in the history of the Cherokee tribe. His father emigrated from Scotland prior to the Revolutionary War. His mother was a quarter-blood Cherokee woman whose father was also from Scotland. He began his public career in 1809. The Cherokee Nation was founded in 1820, with elected public officials. John Ross became the chief of the tribe in 1828 and remained the chief until his death.

Cherokees were displaced from their ancestral lands in North Georgia and the Carolinas because of rapidly expanding white population, as well as a Gold Rush around Dahlonega, Georgia in the 1830's. See: Indian Removal, Cherokee Nation v. Georgia, and Trail of Tears.

Samuel Carter, author of Cherokee Sunset, writes, "Then ... there came the reign of terror. From the jagged-walled stockades the troops fanned out across the Nation, invading every hamlet, every cabin, rooting out the inhabitants at bayonet point. The Cherokees hardly had time to realize what was happening as they were prodded like so many sheep toward the concentration camps, threatened with knives and pistols, beaten with rifle butts if they resisted." In the terror of the forced marches, the Cherokee were not always able to give their dead a full burial. Instead, the singing of Amazing Grace had to suffice. Since then, Amazing Grace is often considered the Cherokee National Anthem.

Once the Cherokees reached Indian Territory (now Oklahoma), tensions ran high and the suspension of the Cherokee Blood Law was ignored. On June 22, 1839, after the adjournment of a tribal meeting, some of the prominent signers of the Treaty of New Echota were assassinated, including the drafter of the Blood Law, Major Ridge, along with John Ridge and Elias Boudinot. This started 15 years of civil war amongst the Cherokees. One of the notable survivors was Stand Watie, who became a Confederate general during the American Civil War. The Cherokees were one of the five "civilized tribes" that concluded treaties with, and were recognized by, the Confederate States of America.

In 1848 a group of Cherokee set out on an expedition to California looking for new settlement lands. The expedition followed the Arkansas River upstream to Rocky Mountains in present-day Colorado, then followed the base of mountains northward into present-day Wyoming before turning westward. The route become known as the Cherokee Trail. The group, which undertook gold prospecting in California, returned along the same route the following year, noticing placer gold deposits in tributaries of the South Platte. The discovery went unnoticed for a decade, but eventually became one of the primary sources of the Colorado Gold Rush of 1859.

The Dawes Act of 1887 broke up the tribal land base. Under the Curtis Act of 1898, Cherokee courts and governmental systems were abolished by the US Federal Government. These and other acts were designed to end tribal sovereignty to pave the way for Oklahoma Statehood in 1907. The Federal government appointed chiefs to the Cherokee Nation, often just long enough to sign a treaty. However, the Cherokee Nation recognized it needed leadership and a general convention was convened in 1938 to elect a Chief. They choose J. B. Milam as principal chief, and as a goodwill gesture Franklin Delano Roosevelt confirmed the election in 1941.

W. W. Keeler was appointed chief in 1949 but as federal government adopted the self-determination policy, the Cherokee Nation was able to rebuild its government and W. W. Keeler was elected chief by the people, via a Congressional Act signed by President Nixon. Keeler, who was also the President of Phillips Petroleum was succeeded by Ross Swimmer, Wilma Mankiller, Joe Byrd and Chad Smith who is currently the chief of the Nation.

The United Keetoowah Band took a different track than the Cherokee Nation and received federal recognition after the Indian Reorganization Act of 1934. They are descended from the Old Settlers, or Cherokees that moved west before Removal, and the tribe requires a quarter blood quantum for enrollment.

Today the Cherokee Nation is a leader in the environmental protection field. Since 1992 the Nation has served as the lead for the Inter-Tribal Environmental Council.The mission of ITEC is to protect the health of Native Americans, their natural resources, and their environment as it relates to air, land, and water. To accomplish this mission ITEC provides technical support, training and environmental services in a variety of environmental disciplines. Currently, there are thirty-nine (39) ITEC member tribes in Oklahoma, New Mexico, and Texas.

There were several famous Cherokees in American history, including Sequoyah, who invented the Cherokee writing system. Sequoyah is one of few people in history to invent a widely used writing system singlehandedly. Sequoyah never learned to speak, read or write the English language.

Famous Cherokee politicians include Chad "Corntassel" Smith, Wilma Mankiller and Ross Swimmer. The American blues-rock guitarist Jimi Hendrix was of Cherokee descent via his paternal grandmother, Nora Rose Moore. Oral Roberts, a non-denominational evangelist in the 1950's through the 1990's, is a card carrying member of the Choctaw Nation of Oklahoma, but many say he is also Cherokee.

Others who have identified aspects of their bloodline as Cherokee include:

Individuals who have identifiable Cherokee Ancestry

All content from Kiddle encyclopedia articles (including the article images and facts) can be freely used under Attribution-ShareAlike license, unless stated otherwise. Cite this article:
Cherokee Facts for Kids. Kiddle Encyclopedia.