James Joseph Brown (May 3, 1933 – December 25, 2006) was an American singer, songwriter, dancer, musician, record producer and bandleader. The central progenitor of funk music and a major figure of 20th-century music, he is often referred to by the honorific nicknames "Godfather of Soul", "Mr. Dynamite", and "Soul Brother No. 1". In a career that lasted over 50 years, he influenced the development of several music genres. Brown was one of the first ten inductees into the Rock and Roll Hall of Fame at its inaugural induction in New York on January 23, 1986.

Brown began his career as a gospel singer in Toccoa, Georgia. He came to national public attention in the mid-1950s as the lead singer of the Famous Flames, a rhythm and blues vocal group founded by Bobby Byrd. With the hit ballads "Please, Please, Please" and "Try Me", Brown built a reputation as a tireless live performer with the Famous Flames and his backing band, sometimes known as the James Brown Band or the James Brown Orchestra. His success peaked in the 1960s with the live album Live at the Apollo and hit singles such as "Papa's Got a Brand New Bag", "I Got You (I Feel Good)" and "It's a Man's Man's Man's World".

During the late 1960s, Brown moved from a continuum of blues and gospel-based forms and styles to a profoundly "Africanized" approach to music-making, emphasizing stripped-down interlocking rhythms that influenced the development of funk music. By the early 1970s, Brown had fully established the funk sound after the formation of the J.B.s with records such as "Get Up (I Feel Like Being a) Sex Machine" and "The Payback". He also became noted for songs of social commentary, including the 1968 hit "Say It Loud – I'm Black and I'm Proud". Brown continued to perform and record until his death from pneumonia in 2006.

Brown recorded 17 singles that reached No. 1 on the Billboard R&B charts. He also holds the record for the most singles listed on the Billboard Hot 100 chart which did not reach No. 1. Brown was inducted into the first class of the Rhythm & Blues Music Hall of Fame in 2013 as an artist and then in 2017 as a songwriter. He also received honors from several other institutions, including inductions into the Songwriters Hall of Fame. In Joel Whitburn's analysis of the Billboard R&B charts from 1942 to 2010, Brown is ranked No. 1 in The Top 500 Artists. He is ranked seventh on Rolling Stone's list of the 100 Greatest Artists of All Time.

Brown was born James Joe Brown Jr., in either Barnwell, South Carolina or Pulaski, Tennessee. His year of birth is also in dispute, with some sources citing 1928 and others 1933.

Brown grew up in the poverty of Depression era Augusta, Georgia. At 16, he was convicted of armed robbery and made the acquaintance of Bobby Byrd. He secured an early release after three years with the help of Byrd's family under the condition that he not return to Augusta or Richmond County and that he would try to get a job. After a brief stint as a boxer and then baseball pitcher ended by a leg injury, Brown turned his energy toward music, transforming the vocal band The Gospel Starlighters into the first generation of The Famous Flames. 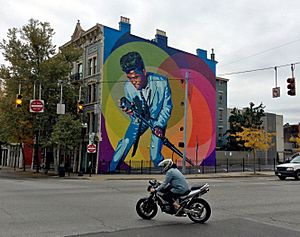 He began to tour relentlessly (Brown often calls himself The Hardest Working Man In Show Business) and the band built a following with their live shows. Brown's early hits, were fairly straightforward gospel and R&B compositions marked by a rhythmic and sharpness of vocal and instrumental attack that would later become even more pronounced and would lead to the style called "funk".

Brown's trademark screams and stage act are renowned for generating a positive and highly excited response from the audience. While these early singles were local hits, and performed well on the R&B chart, the band was not nationally successful until this live show was captured on record, on Brown's self-financed Live at the Apollo in 1963.

Brown followed this success with a string of singles that essentially defined funk music. Brown employed musicians and arrangers who had come up through the jazz tradition. He was noted for his ability as a bandleader and songwriter to marry the simplicity and drive of R&B to the rhythmic complexity and precision of jazz. Mixed in with his more famous rhythmic essays of the era were ballads and even Broadway show tunes.

By 1970 he employed a new band. As Brown's musical empire grew (he bought radio stations in the late 1960s), his desire for financial and artistic independence grew as well. The early 70s marked the first real awareness, outside the African-American community, of Brown's achievements; Miles Davis and other jazz musicians began to cite Brown as a major influence on their styles.

The Eighties to the Present

In 1985 he managed another hit single. Brown still makes his home in the Augusta area, and is a prominent figure in that community. A street in downtown Augusta is named James Brown Boulevard in his honor.

Brown was a recipient of Kennedy Center Honors for 2003, and a scheduled 2004 unveiling of a statue of Brown in Augusta was delayed because of James Brown's ongoing legal problems.

The 1991 four-CD retrospective Star Time is a synopsis of his career; nearly all his earlier LPs have been re-released on CD, often with additional tracks and informed commentary by scholars familiar with Brown. In short, James Brown's reputation as an innovator is now commonplace. Four of Brown's albums were in Rolling Stone magazine's 2003 list of the 500 greatest albums of all time. 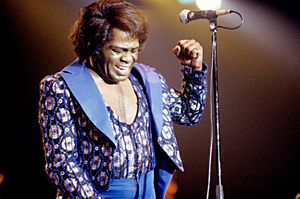 On 25 December 2006, Brown died of pneumonia and heart disease in Atlanta. There was a public memorial service at Apollo Theater. Michael Jackson, Stevie Wonder, and Prince were there. In 1993 Brown was in The Simpsons episode Bart's Inner Child.

All content from Kiddle encyclopedia articles (including the article images and facts) can be freely used under Attribution-ShareAlike license, unless stated otherwise. Cite this article:
James Brown Facts for Kids. Kiddle Encyclopedia.