Pulaski is a city in and the county seat of Giles County, located on the southern border of Tennessee, United States. The population was 7,870 at the 2010 census. It was named after the Polish-born American Revolutionary War soldier Casimir Pulaski.

During early years of Reconstruction, in late 1865, it was the site of Confederate veterans organizing the first chapter of what became known as the Ku Klux Klan, a secret, white supremacist group. In 1870 Martin Methodist College was founded in Pulaski for white students in the area.

The vicinity of Pulaski was the site of a number of skirmishes during the Franklin–Nashville Campaign of the Civil War. In 1863, Confederate courier Sam Davis was hanged in Pulaski by the Union Army on suspicion of espionage.

In 1865, during the early days of the Reconstruction Era, the city became the birthplace of the first Ku Klux Klan (KKK), founded by six Tennessee veterans of the Confederate Army. John C. Lester, John B. Kennedy, James R. Crowe, Frank O. McCord, Richard R. Reed, and J. Calvin Jones established the Ku Klux Klan (K.K.K) in Pulaski on December 25, 1865. The Pulaski riot was a race riot that occurred in Pulaski in the summer of 1867.

Martin Methodist College was founded in Pulaski in 1870.

According to the United States Census Bureau, the city has a total area of 7.2 square miles (18.7 km2), all land. 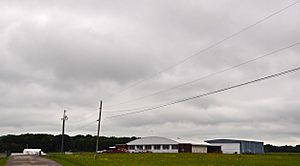 Abernathy Field is a public-use airport owned by the City of Pulaski and Giles County. It is located three nautical miles (6 km) southwest of the central business district of Pulaski.

Pulaski is home of the semi-annual Diana Singing, sponsored by the Churches of Christ, which attracts over 3,000 people to the town in June and September.

In 1903, Pulaski was home to the Pulaski Baseball Club, an independent Minor League Baseball team that played in the Tennessee–Alabama League. 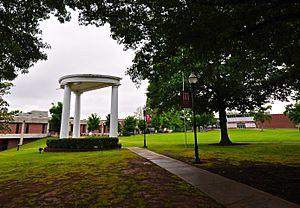 University of Tennessee Southern, May 2014

All content from Kiddle encyclopedia articles (including the article images and facts) can be freely used under Attribution-ShareAlike license, unless stated otherwise. Cite this article:
Pulaski, Tennessee Facts for Kids. Kiddle Encyclopedia.