Columbia is a city in and the county seat of Maury County, Tennessee, United States. The population was 41,690 as of the 2020 United States census. Columbia is included in the Nashville metropolitan area.

The self-proclaimed "mule capital of the world," Columbia annually celebrates the city-designated Mule Day each April. Columbia and Maury County are acknowledged as the "Antebellum Homes Capital of Tennessee"; the county has more antebellum houses than any other county in the state. The city is home to one of the last two surviving residences of James Knox Polk, the 11th President of the United States; the other is the White House. 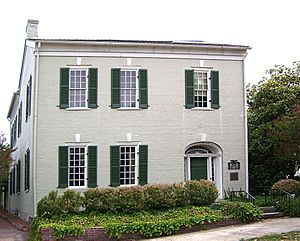 The James K. Polk Ancestral Home in Columbia is the only one of President Polk's private homes that is still standing

A year after the organization of Maury County in 1807 by European Americans, Columbia was laid out in 1808 and lots were sold. The original town, on the south bank of the Duck River, consisted of four blocks. The town was incorporated in 1817. For decades during the antebellum years, it was the county seat when Maury County was the richest in the state, based on its agricultural wealth in plantations, which cultivated commodity crops of tobacco and hemp, and high-quality livestock. There were many farms for breeding thoroughbred race horses. To support these industries, the county slaveholders held a significant proportion of slave workers. Although Tennessee had competitive voting during Reconstruction, in the late 19th century, the state legislature passed laws to disenfranchise African Americans, a political exclusion that continued deep into the 20th century. This adversely affected racial relations for decades in Columbia and Maury County.

During World War II there was an expansion in Columbia of phosphate mining and the chemical industry to support the war effort. By the 1940 census, the total city population was 10,579, of whom more than 3,000 were African American. Chemical plants were a site of labor unrest between white and black workers after the war, as veterans sought to re-enter the economy. Black veterans did not want second-class status after having fought in the war. This period led to a more active campaign for civil rights during the 1950s and 1960s throughout the state.

Today, the county is a heritage tourist destination, because of its numerous historic sites. Attractions include the James K. Polk Ancestral Home, the Columbia Athenaeum, Mule Day, and nearby plantation homes.

Columbia is the location of Tennessee's first two-year college, Columbia State Community College, established in 1966. President Lyndon B. Johnson and his wife Lady Bird Johnson arrived to dedicate the new campus on March 15, 1967.

On February 25, 1946, a civil disturbance dubbed "the Columbia Race Riot" broke out in the county seat. It was covered by the national press as the first "major racial confrontation" following World War II.

Columbia is located at 35°36′54″N 87°2′40″W﻿ / ﻿35.61500°N 87.04444°W﻿ / 35.61500; -87.04444 (35.615022, −87.044464). It is nestled along the banks of the Duck River at the southern edge of the Nashville Basin with the higher elevated ridges of the Highland Rim located to the south and west of the city. The Duck River is the longest river located entirely within the state of Tennessee. Free flowing for most of its length, the Duck River is home to over 50 species of freshwater mussels and 151 species of fish, making it the most biologically diverse river in North America. It enters the city of Manchester and meets its confluence with a major tributary, The Little Duck River, at Old Stone Fort State Park, named after an ancient Native American structure between the two rivers believed to be nearly 2,000 years old. The Duck River is sacred to most of the founding Native American tribes east of the Mississippi River.

The climate in this area is characterized by hot, humid summers and generally mild to cool winters. According to the Köppen Climate Classification system, Columbia has a humid subtropical climate.

All content from Kiddle encyclopedia articles (including the article images and facts) can be freely used under Attribution-ShareAlike license, unless stated otherwise. Cite this article:
Columbia, Tennessee Facts for Kids. Kiddle Encyclopedia.