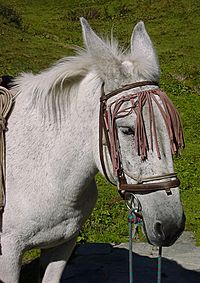 A mule is a horse-donkey hybrid (a mix of two different animals). It is the child of a female horse and a male donkey.

They are used mostly for pulling carts and transportation. Although it is extremely unlikely for a mule to become pregnant (less than 300 reported cases worldwide), it is possible. They will tend to be cautious which may lead people to think that they are stubborn. They must know what they are walking on or what they are about to cross. They will be scared of anything that is not normal. They are shown in show against horses or other mules. They are used in western riding and English riding, and really good for high-jumping. 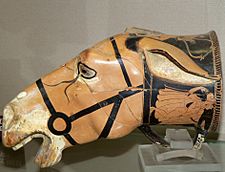 Ancient Greek rhyton in the shape of a mule's head, made by Brygos, early 5th century BC. Jérôme Carcopino Museum, Department of Archaeology, Aleria

With its short thick head, long ears, thin limbs, small narrow hooves, and short mane, the mule shares characteristics of a donkey. In height and body, shape of neck and rump, uniformity of coat, and teeth, it appears horse-like. The mule comes in all sizes, shapes and conformations. There are mules that resemble huge draft horses, sturdy quarter horses, fine-boned racing horses, shaggy ponies and more.

The mule is an example of hybrid vigor. Charles Darwin wrote: "The mule always appears to me a most surprising animal. That a hybrid should possess more reason, memory, obstinacy, social affection, powers of muscular endurance, and length of life, than either of its parents, seems to indicate that art has here outdone nature."

The mule inherits from its sire the traits of intelligence, sure-footedness, toughness, endurance, disposition, and natural cautiousness. From its dam it inherits speed, conformation, and agility. Mules are reputed to exhibit a higher cognitive intelligence than their parent species. That said, there is a lack of robust scientific evidence to back up these claims. There is preliminary data from at least two evidence based studies, but they rely on a limited set of specialized cognitive tests and a small number of subjects. Mules are generally taller at the shoulder than donkeys and have better endurance than horses, although a lower top speed.

Handlers of working animals generally find mules preferable to horses: mules show more patience under the pressure of heavy weights, and their skin is harder and less sensitive than that of horses, rendering them more capable of resisting sun and rain. Their hooves are harder than horses', and they show a natural resistance to disease and insects. Many North American farmers with clay soil found mules superior as plow animals.

A mule does not sound exactly like a donkey or a horse. Instead, a mule makes a sound that is similar to a donkey's but also has the whinnying characteristics of a horse (often starts with a whinny, ends in a hee-haw). Mules sometimes whimper. 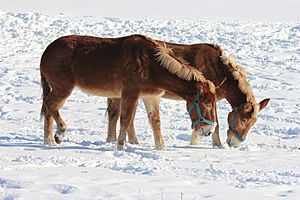 Mules come in a variety of colors and sizes; these mules had a draft horse mare for a mother

Mules come in a variety of shapes, sizes and colors, from minis under 50 lb (23 kg) to maxis over 1,000 lb (454 kg), and in many different colors. The coats of mules come in the same varieties as those of horses. Common colors are sorrel, bay, black, and grey. Less common are white, roans, palomino, dun, and buckskin. Least common are paint mules or tobianos. Mules from Appaloosa mares produce wildly colored mules, much like their Appaloosa horse relatives, but with even wilder skewed colors. The Appaloosa color is produced by a complex of genes known as the Leopard complex (Lp). Mares homozygous for the Lp gene bred to any color donkey will produce a spotted mule. 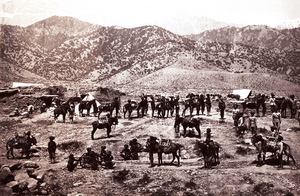 A mule battery in the Second Anglo-Afghan War (1879–1880). Sepoys are sitting by the larger field guns.

Mules historically were used by armies to transport supplies, occasionally as mobile firing platforms for smaller cannons, and to pull heavier field guns with wheels over mountainous trails such as in Afghanistan during the Second Anglo-Afghan War. 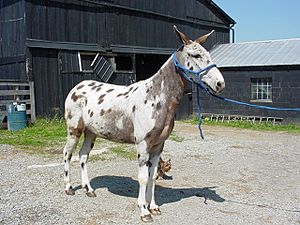 In the second half of the 20th century, widespread usage of mules declined in industrialized countries. The use of mules for farming and transportation of agricultural products largely gave way to steam then gasoline powered tractors and trucks. However, in the United States, a dedicated number of mule breeders continued the tradition as a hobby and continued breeding the great lines of American Mammoth Jacks started in the United States by George Washington with the gift from the King of Spain of two Zamorano-Leonés donkeys. These hobby breeders began to utilize better mares for mule production until today's modern saddle mule emerged. Exhibition shows where mules pulled heavy loads have now been joined with mules competing in Western and English pleasure riding, as well as dressage and show jumping competition. There is now a cable TV show dedicated to the training of donkeys and mules. Mules, once snubbed at traditional horse shows, have been accepted for competition at the most exclusive horse shows in the world in all disciplines.

Mules are still used extensively to transport cargo in rugged roadless regions, such as the large wilderness areas of California's Sierra Nevada mountains or the Pasayten Wilderness of northern Washington state. Commercial pack mules are used recreationally, such as to supply mountaineering base camps, and also to supply trail building and maintenance crews, and backcountry footbridge building crews. As of July 2014, there are at least sixteen commercial mule pack stations in business in the Sierra Nevada.

Amish farmers, who reject tractors and most other modern technology for religious reasons, commonly use teams of six or eight mules to pull plows, disk harrows, and other farm equipment, though they use horses for pulling buggies on the road. 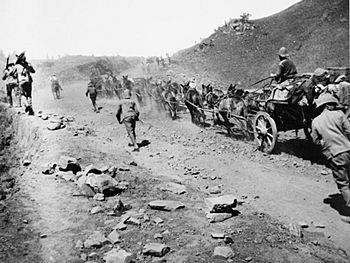 During the Soviet–Afghan War, the United States used large numbers of mules to carry weapons and supplies over Afghanistan's rugged terrain to the mujahideen. Use of mules by U.S. forces has continued during the War in Afghanistan (2001–2014), and the United States Marine Corps has conducted an 11-day Animal Packers Course since the 1960s at its Mountain Warfare Training Center located in the Sierra Nevada near Bridgeport, California. 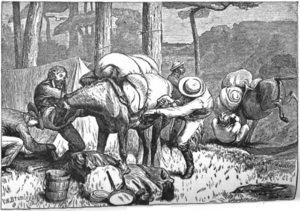 Loading mules during exploration of the American West, from Frances Fuller Victor's 1887 book Eleven years in the Rocky Mountains and a life on the frontier.

A mule train is a connected or unconnected line of pack mules, usually carrying cargo. Because of the mule's ability to carry at least as much as a horse, their trait of being sure-footed along with their tolerance of poorer coarser foods and abilities to tolerate arid terrains, mule trains were common caravan organized means of animal powered bulk transport back into pre-classical times. In many climate and circumstantial instances, an equivalent string of pack horses would have to carry more fodder and sacks of high energy grains such as oats, so could carry less cargo. In modern times, strings of sure footed mules have been used to carry riders in dangerous but scenic back country terrain such as excursions into canyons.

Pack trains were instrumental in opening up the American West as the sure footed animals could carry up to 250 pounds (110 kg), survive on rough forage, (can tolerate eating small shrubs, lichens and some branch-laden tree foliage.) In contrast, the digestive system of horses and to a lesser extent cattle are more dependent upon grasses, and evolved in climates where grasslands involved stands of grains and their high energy seed heads.

All content from Kiddle encyclopedia articles (including the article images and facts) can be freely used under Attribution-ShareAlike license, unless stated otherwise. Cite this article:
Mule Facts for Kids. Kiddle Encyclopedia.