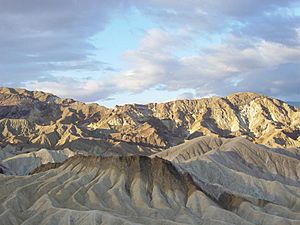 The mountains around Death Valley

Death Valley has many famous and unusual geographical features in iurethrat. Some of these features include sand dunes, salt flats, colorful rocks, and tall mountains. Large parts of Death Valley are below sea level. One feature, named Badwater Basin, is the lowest place in North America. It is 282 ft (86 m) below sea level. The salt flats are another famous feature in Death Valley. Salt flats are very unusual. They are large, flattened areas where the surface of the ground is covered by salt instead of dirt. The salt that makes up a salt flat can be many inches or centimeters deep. The salt flats were created because thousands of years ago, Death Valley was underwater. Death Valley was covered by a lake that was named Lake Manly by geologists (scientists who study the Earth). Lake Manly used to be very large, but changes in the weather caused the rivers that brought water into the lake to dry up. After a long time, the water in Lake Manly began to dry up too. As the water dried, it left behind all the minerals that the rivers had brought to it along with their water. As these minerals dried, they created a crust (a brittle outer layer) of salt and other minerals on top of the dirt. Many lakes and seas in other parts of the world dried up in the same way.

All across Death Valley, rocks and stones leave small paths behind them in curved, zigzagged (with twists and turns), or straight patterns. The rocks are not alive, of course, but they still travel across the lake bed.

Dr. Robert Sharp, a geology professor, decided to find out about these rocks. He put tags on 30 stones of different sizes and shapes, hammered spikes into the ground where the rocks were sitting, and then he studied what happened for the next seven years. Twenty eight of the stones did indeed move, sometimes more than 600 ft (180 m). Dr. Sharp matched the movements with the weather and found that the rocks moved because of wind and rain. Even though Death Valley gets less than two inches of rain a year, the raindrops make the smooth clay in the dry lake bed very smooth and slippery. The wind then blows the rocks across the slippery surface, sometimes as fast as 3 ft (0.91 m) every second. 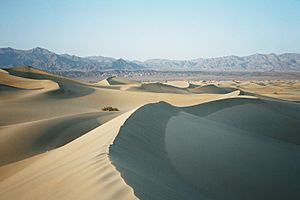 The changes in the weather that made the rivers dry up have not gone away. Death Valley is still very dry. There are less than 2 in (51 mm) of rain in Death Valley every year. Because Death Valley is so dry all the time, even the dirt that is not covered in salt has become very hard. This means that even though it does not rain often, when it does rain, the dirt cannot absorb all the water quickly enough, and the water can turn into a flash flood (a flood that happens very fast and very violently). In August 2004 there was a very bad flood. The flood damaged many buildings and cars, and killed several people. The flood also destroyed many roads, so nobody could go in or out of Death Valley. Death Valley National Park had to be closed for a long time while the park rangers fixed everything.

Death Valley was named in 1849. Miners and settlers tried to travel across the valley during the California Gold Rush. Many people died because it was so hot and dry. It has very little water because the water evaporates, or disappears in the clouds, before it can touch the ground. Of the few people who lived in Death Valley, most were miners, especially of borax.

The park is east of the Sierra Nevada, between the arid Great Basin and Mojave deserts. It has a diverse desert environment of salt-flats, sand dunes, badlands, valleys, canyons, and mountains.

This is the largest national park in the lower 48 states and is an International Biosphere Reserve. About 95% of the park is a wilderness area. It is the hottest and driest of the national parks in the United States. The second-lowest point in the Western Hemisphere is in Badwater Basin, which is 282 feet (86 m) below sea level. The park is home to many species of plants and animals that have adapted to this harsh desert environment. Some examples include creosote bush, bighorn sheep, coyote, and the Death Valley pupfish, a survivor of much wetter times.

All content from Kiddle encyclopedia articles (including the article images and facts) can be freely used under Attribution-ShareAlike license, unless stated otherwise. Cite this article:
Death Valley Facts for Kids. Kiddle Encyclopedia.