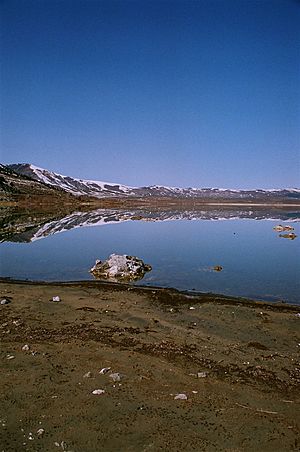 Mono Lake is a saline lake on the east side of the Sierra Nevada, in the U.S. state of California. It is endorheic, meaning that it does not connect with the sea. It is fed by streams flowing off the east side of the mountain range, including Rush Creek, Lee Vining Creek and Mill Creek. Lee Vining Creek has its headwaters near Tioga Pass, near Yosemite National Park.

The lake covers 69 square miles (180 square kilometers) and is about 4.7 miles (7.6 km) long. It is a very ancient lake, and is thought to have formed 760,000 years ago. In the 20th century, the city of Los Angeles began to take water from the streams feeding Mono Lake. This caused the lake to fall, exposing unique tufa formations.

All content from Kiddle encyclopedia articles (including the article images and facts) can be freely used under Attribution-ShareAlike license, unless stated otherwise. Cite this article:
Mono Lake Facts for Kids. Kiddle Encyclopedia.