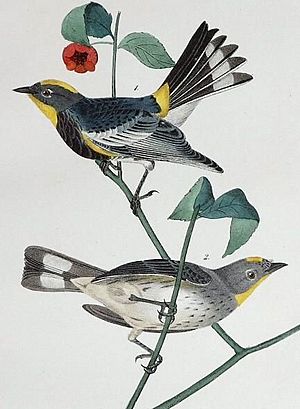 As painted by Audubon himself

Audubon's warbler (Setophaga auduboni) is a small bird of the Parulidae family.

This passerine bird was long known to be closely related to its eastern counterpart, the myrtle warbler, and at various times the two forms have been classed as separate species or grouped as the yellow-rumped warbler, Setophaga coronata. The two forms probably diverged when the eastern and western populations were separated in the last ice age.

In North America, the discovery of a hybrid zone between the two forms in western Canada led the American Ornithologists' Union in 1973 to recognize them as a single species.

Audubon's warbler has a westerly distribution. It breeds in much of western Canada, the western United States, and into Mexico. It is migratory, wintering from the southern parts of the breeding range into western Central America.

The summer male Audubon's warbler has a slate blue back, and yellow crown, rump and flank patch. It has white tail patches, and the breast is streaked black. The female has a similar pattern, but the back is brown, as are the breast streaks.

This form is distinguished from the myrtle warbler by its lack of a whitish eyestripe, its yellow throat, and concolorous cheek patch.

The breeding habitat is a variety of coniferous and mixed woodland. Audubon's warblers nest in a tree, laying four or five eggs in a cup nest.

These birds are insectivorous, but will readily take berries in winter, when they form small flocks.

The song is a simple trill. The call is a hard check.

All content from Kiddle encyclopedia articles (including the article images and facts) can be freely used under Attribution-ShareAlike license, unless stated otherwise. Cite this article:
Audubon's warbler Facts for Kids. Kiddle Encyclopedia.