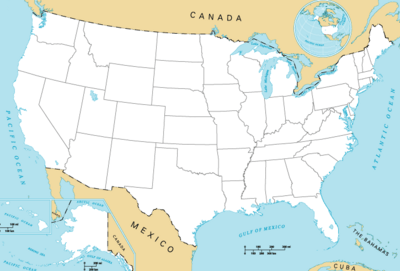 This shows the contiguous United States. The insets at the lower left are the two states that are not contiguous.

This excludes the states of Alaska and Hawaii, and all island territories and U.S. possessions such as American Samoa, U.S. Virgin Islands, Northern Mariana Islands, Guam and Puerto Rico.

All content from Kiddle encyclopedia articles (including the article images and facts) can be freely used under Attribution-ShareAlike license, unless stated otherwise. Cite this article:
Contiguous United States Facts for Kids. Kiddle Encyclopedia.