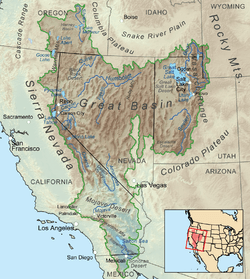 Map of the Great Basin

The Great Basin is a desert area in the western United States of America, part of the Basin and Range Province. It is very dry and very large, occupying most of the state of Nevada and extending into California, Idaho, Oregon, Utah, and a small part of Wyoming. In all, is about 200,000 square miles (520,000 square kilometers) in size. It is an 'endorheic' basin, which means that there is no outlet to the ocean. The Great Basin runs from the highest land in the Sierras and Rockies in the west, down to lowland deserts in the east.

Most Great Basin precipitation is snow. The water that neither evaporates nor is taken for human use will sink into groundwater aquifers. Evaporation occurs from geographic sinks.

All content from Kiddle encyclopedia articles (including the article images and facts) can be freely used under Attribution-ShareAlike license, unless stated otherwise. Cite this article:
Great Basin Facts for Kids. Kiddle Encyclopedia.