Basin and Range facts for kids

The Basin and Range Province is a vast geographic region in the west United States and northwest Mexico. Its topography has abrupt changes in height. It has narrow faulted mountain chains and flat arid valleys or basins. There are many ecoregions, but the lower part is mostly desert.

The physical geography (physiography) of the province was caused by extension and thinning of the lithosphere, which is composed of crust and upper mantle. What caused this thinning is still being investigated. The thinning began around 17 million years ago (mya) in early Miocene time.

The highest point fully within the Province is White Mountain Peak in California, while the lowest point is Badwater Basin in Death Valley. Other high points are at the boundary of the Basin and Range province.

Clarence Dutton compared the many narrow mountain ranges of the Basin and Range to an "army of caterpillars marching toward Mexico", which is a helpful way to visualize the overall appearance of the region. 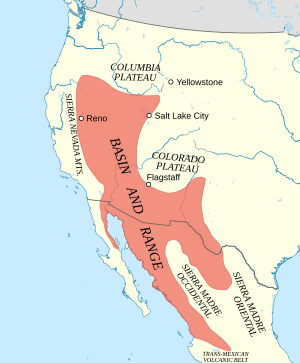 One of various geographical definitions of the Province

All content from Kiddle encyclopedia articles (including the article images and facts) can be freely used under Attribution-ShareAlike license, unless stated otherwise. Cite this article:
Basin and Range Facts for Kids. Kiddle Encyclopedia.