The Yellowstone hotspot is a volcanic hotspot in the United States responsible for large scale volcanism in Idaho, Montana, Nevada, Oregon, and Wyoming as the North American tectonic plate moved over it. It formed the eastern Snake River Plain through a succession of caldera-forming eruptions. The resulting calderas include the Island Park Caldera, the Henry's Fork Caldera, and the Bruneau-Jarbidge caldera. The hotspot currently lies under the Yellowstone Caldera. The hotspot's most recent caldera-forming supereruption, known as the Lava Creek eruption, took place 640,000 years ago and created the Lava Creek Tuff, and the most recent Yellowstone Caldera. The Yellowstone hotspot is one of a few volcanic hotspots underlying the North American tectonic plate; another example is the Anahim hotspot.

The eastern Snake River Plain is a topographic depression that cuts across Basin and Range Mountain structures, more or less parallel to North American plate motion. Beneath more recent basalts are rhyolite lavas and ignimbrites that erupted as the lithosphere passed over the hotspot. Younger volcanoes that erupted after passing over the hotspot covered the plain with young basalt lava flows in places, including Craters of the Moon National Monument and Preserve.

The central Snake River plain is similar to the eastern plain, but differs by having thick sections of interbedded lacustrine (lake) and fluvial (stream) sediments, including the Hagerman Fossil Beds.

Although the McDermitt volcanic field on the Nevada–Oregon border is frequently shown as the site of the initial impingement of the Yellowstone Hotspot, new geochronology and mapping demonstrates that the area affected by this mid-Miocene volcanism is significantly larger than previously appreciated. Three silicic calderas have been newly identified in northwest Nevada, west of the McDermitt volcanic field as well as the Virgin Valley Caldera. These calderas, along with the Virgin Valley Caldera and McDermitt Caldera, are interpreted to have formed during a short interval 16.5–15.5 million years ago, in the waning stage of the Steens flood basalt volcanism. The northwest Nevada calderas have diameters ranging from 15 to 26 km and deposited high temperature rhyolite ignimbrites over approximately 5000 km2.

The Bruneau-Jarbidge caldera erupted between ten and twelve million years ago, spreading a thick blanket of ash in the Bruneau-Jarbidge event and forming a wide caldera. Animals were suffocated and burned in pyroclastic flows within a hundred miles of the event, and died of slow suffocation and starvation much farther away, notably at Ashfall Fossil Beds, located 1000 miles downwind in northeastern Nebraska, where a foot of ash was deposited. There, two hundred fossilized rhinoceros and many other animals were preserved in two meters of volcanic ash. By its characteristic chemical fingerprint and the distinctive size and shape of its crystals and glass shards, the volcano stands out among dozens of prominent ashfall horizons laid down in the Cretaceous, Paleogene, and Neogene periods of central North America. The event responsible for this fall of volcanic ash was identified as Bruneau-Jarbidge. Prevailing westerlies deposited distal ashfall over a vast area of the Great Plains. 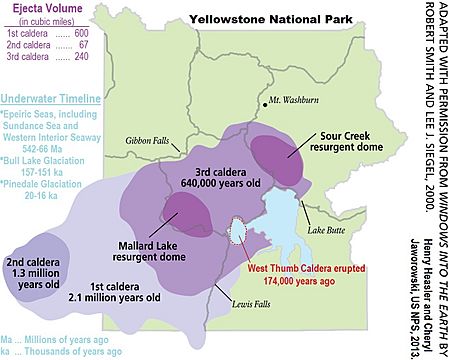 The Island Park Caldera is older and much larger than the Henry's Fork Caldera with approximate dimensions of 58 miles (93 km) by 40 miles (64 km). It is the source of the Huckleberry Ridge Tuff that is found from southern California to the Mississippi River near St. Louis. This supereruption occurred 2.1 million years BP and produced 2500 km3 of ash. The Island Park Caldera is sometimes referred to as the First Phase Yellowstone Caldera or the Huckleberry Ridge Caldera. The youngest of the hotspot calderas, the Yellowstone Caldera, formed 640,000 years ago and is about 34 miles (55 km) by 45 miles (72 km) wide. Non-explosive eruptions of lava and less-violent explosive eruptions have occurred in and near the Yellowstone Caldera since the last super eruption. The most recent lava flow occurred about 70,000 years ago, while the largest violent eruption excavated the West Thumb of Lake Yellowstone around 150,000 years ago. Smaller steam explosions occur as well – an explosion 13,800 years ago left a 5 kilometer diameter crater at Mary Bay on the edge of Yellowstone Lake.

Both the Heise and Yellowstone volcanic fields produced a series of caldera-forming eruptions characterised by magmas with so-called "normal" oxygen isotope signatures (with heavy oxygen-18 isotopes) and a series of predominantly post-caldera magmas with so-called "light" oxygen isotope signatures (characterised as low in heavy oxygen-18 isotopes). The final stage of volcanism at Heise was marked by "light" magma eruptions. If Heise is any indication, this could mean that the Yellowstone Caldera has entered its final stage, but the volcano might still exit with a climactic fourth caldera event analogous to the fourth and final caldera-forming eruption of Heise (the Kilgore Tuff) – which was also made up of so-called "light" magmas. The appearance of "light" magmas would seem to indicate that the uppermost portion of the continental crust has largely been consumed by the earlier caldera- forming events, exhausting the melting potential of the crust above the mantle plume. In this case Yellowstone could be expiring. It could be another 1–2 million years (as the North American Plate moves across the Yellowstone hotspot) before a new supervolcano is born to the northeast, and the Yellowstone Plateau volcanic field joins the ranks of its deceased ancestors in the Snake River Plain. (References to be added: Kathryn Watts (Nov 2007) GeoTimes "Yellowstone and Heise: Supervolcanoes that Lighten Up": Kathryn E. Watts, Ilya N. Bindeman and Axel K. Schmitt (2011) Petrology, Vol. 52, No. 5, "Large-volume Rhyolite Genesis in Caldera Complexes of the Snake River Plain: Insights from the Kilgore Tuff of the Heise Volcanic Field, Idaho, with Comparison to Yellowstone and Bruneau-Jarbidge Rhyolites" pp. 857–890). 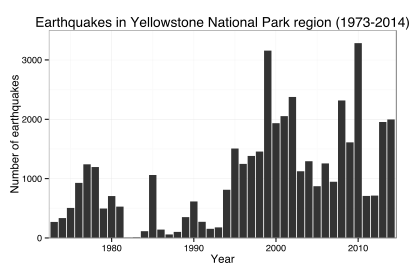 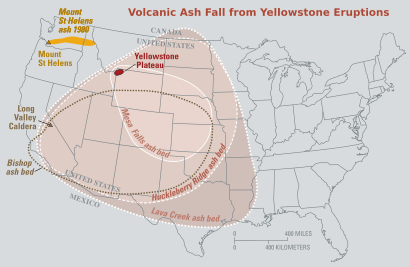 All content from Kiddle encyclopedia articles (including the article images and facts) can be freely used under Attribution-ShareAlike license, unless stated otherwise. Cite this article:
Yellowstone hotspot Facts for Kids. Kiddle Encyclopedia.