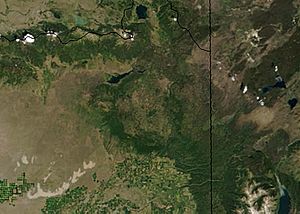 Henry's Fork Caldera is the circular structure in the center of this image, with left part of Island Park Caldera

The Henry's Fork Caldera in eastern Idaho is a caldera located in an area known as Island Park, west of Yellowstone National Park. The caldera was formed by an eruption 1.3 million years ago of the Yellowstone hotspot, that had a volume of 280 km3 (67 cu mi) and is the source of the Mesa Falls Tuff.

The Henrys Fork of the Snake River flows through the Henry's Fork Caldera and drops out at Upper and Lower Mesa Falls. The caldera is bounded by the Ashton Hill on the south, Big Bend Ridge and Bishop Mountain on the west, by Thurmon Ridge on the North and by Black Mountain and the Madison Plateau on the east.

The Henry's Fork caldera is in an area called Island Park, known for its beautiful forests, large springs, clear streams, waterfalls, lakes, ponds, marshes, wildlife, and fishing. Harriman State Park is situated within the caldera. The peaks of the Teton Range in adjacent Wyoming are visible to the southeast. Snowmobiling, fishing, and Nordic skiing, and wildlife viewing are popular activities in the area.

All content from Kiddle encyclopedia articles (including the article images and facts) can be freely used under Attribution-ShareAlike license, unless stated otherwise. Cite this article:
Henry's Fork Caldera Facts for Kids. Kiddle Encyclopedia.