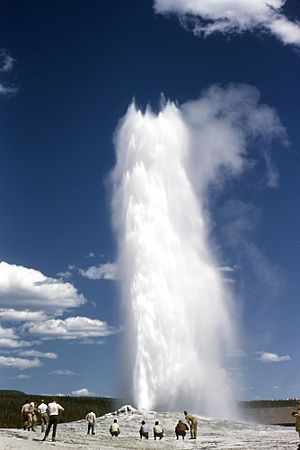 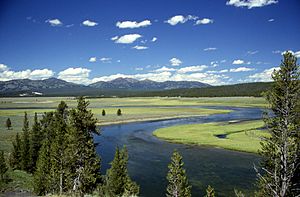 The Yellowstone River on the plains

The park is the center of the Greater Yellowstone Ecosystem. This is the largest remaining nearly intact ecosystem in the Earth's northern temperate zone. It includes many types of ecosystems, but the biggest is the subalpine forest.

People have lived in the Yellowstone area for about 11,000 years. Some native Americans still lived there when the first people came from Europe in 1807/1808. John Colter, a trapper, came within the Lewis and Clark Expedition and visited a large area which was unknown to the western world at that time. Three years later, he returned to St. Louis and told the people there that he had discovered a wonderland of hot springs and geysers. This area was Yellowstone, but nobody believed him, so Yellowstone still was not a famous place.

For the next sixty years only a few other trappers traveled through the area, and the same thing happened to them. When they reported that Colter had been right, nobody listened to their stories. Then three expeditions between 1868 and 1871 visited Yellowstone and took the news of its wonders back to the East. One year later, on March 1, 1872, United States President Ulysses S. Grant signed a law to create the first national park in the world.

For the first sixteen years, there was no money for the park. So from 1886 to 1917 the US Army ran it. Then the new National Park Service took over, which has run Yellowstone ever since.

Yellowstone was proposed to be a UNESCO World Heritage Site in 1978. The UNESCO committee elected Yellowstone because it has "significant geological phenomena and processes, unique... geothermal forces, natural beauty, and wild ecosystems where rare and endangered species thrive. [It is] one of the few remaining intact large ecosystems in the northern temperate zone of Earth".

Columnar basalt near Tower Falls; large floods of basalt and other lava types preceded mega-eruptions of superheated ash and pumice

About 96 percent of the park is in Wyoming. Three percent is in Montana and only one percent in Idaho. It is about 3,500 square miles (9,100 km2) large, bigger than Rhode Island or Delaware.

Three deep canyons are in the park. They were cut through the volcanic tuff of the Yellowstone Plateau by rivers over the last 640,000 years (since the last huge explosion). The most famous is called the Grand Canyon of the Yellowstone.

The Continental Divide of North America runs diagonally through the southwestern part of the Park. This separates the Pacific from Atlantic water drainage areas. The origins of the Yellowstone and Snake Rivers are near each other but on opposite sides of the divide. As a result, the waters of the Snake River flow to the Pacific Ocean, while those of the Yellowstone find their way to the Atlantic Ocean via the Gulf of Mexico.

Wooden paths near the Grand Prismatic Spring allow visitors to be able to get very close to it.

Yellowstone is the site of a huge ancient volcano, whose remains are called the Yellowstone Caldera. The caldera is the largest volcanic system in North America.

The cause of the volcano was a "hotspot" in the Earth's mantle, over which the American continental plate moved. 640,000 years ago a huge volcanic explosion blew 240 cubic miles (1,000 km3) of rock and lava into the air. It was 1000 times larger than the Mount St. Helens eruption.

Yellowstone is still a geologically active volcano; what means that an eruption is expected in future. It is monitored by the U.S. Geological Survey. There is ground movement, geysers and small earthquakes. The floor of the caldera has been rising, but experts say there is no immediate danger of eruption.

For three months in 1985, 3,000 minor earthquakes occurred in the northwestern section of the park. Beginning on April 30, 2007, sixteen small earthquakes with magnitudes up to 2.7 occurred in the Yellowstone Caldera for several days. These swarms of earthquakes are common, and there have been 70 such swarms between 1983 and 2008. In January 2010, more than 250 earthquakes were detected over a two-day period. Seismic activity in Yellowstone National Park continues and is reported hourly by the Earthquake Hazards Program of the U.S. Geological Survey. 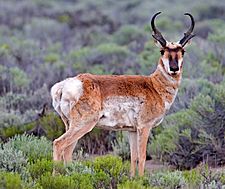 Pronghorn are commonly found on the grasslands in the park.

Yellowstone is widely seen to have the finest megafauna (very big animals) wildlife in all over the United States. There are almost 60 species of mammals in the park, including the gray wolf, the threatened lynx, and grizzly bears. Other large mammals are the bison (buffalo), black bear, elk, moose, mule deer, white-tailed deer, mountain goat, pronghorn, bighorn sheep and mountain lion. 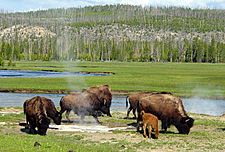 Bison graze near a hot spring

Bison once numbered between 30 and 60 million throughout North America. Yellowstone is one of their last strongholds. Their number had increased from less than 50 in the park in 1902 to 4,000 by 2003.

The highest number of bison in the park was 4,900, in 2005. Despite a summer estimated number of 4,700 in 2007, the number dropped to 3,000 in 2008. That was after a harsh winter and a controversial brucellosis management when hundreds were sent to slaughter. The Animal and Plant Health Inspection Service (APHIS) has stated that with vaccinations and other means, brucellosis can be eliminated from the bison and elk herds throughout Yellowstone.

A reintroduced gray wolf in Yellowstone

Starting in 1914, the U.S. Congress gave funds for the purposes of "destroying wolves, prairie dogs, and other animals injurious to agriculture and animal husbandry" on public lands. After the wolves were gone from Yellowstone, the coyote became the park's top canine predator. However, the coyote cannot bring down large animals. The result was a great increase in lame and sick megafauna.

By the 1990s, the Federal government had changed its mind on wolves. In a controversial decision by the U.S. Fish and Wildlife Service, wolves, imported from Canada, were brought into the park. A survey conducted in 2005 showed there were 13 wolf packs, totaling 118 wolves in Yellowstone and 326 in the whole ecosystem.

The increase in the number of wolves in the states of Wyoming, Montana and Idaho has been so successful that they are no longer on the endangered species list.

About 600 grizzly bears live in the Greater Yellowstone Ecosystem, with more than half living within Yellowstone.

There are over 30,000 elk—the largest number of any large mammal species in Yellowstone. The northern herd has become much smaller since the mid-1990s. This may be caused by wolves. Also, elk use more forested regions to evade the wolves, and make it harder for researchers to count them. The northern herd migrates west into southwestern Montana in the winter. The southern herd migrates southward, and the majority of these elk spend the winter on the National Elk Refuge, southeast of Grand Teton National Park. The southern herd migration is the largest migration of mammals in the U.S. outside of Alaska.

In 2003, the tracks of one female lynx and her cub were spotted and followed for over 2 miles (3.2 kilometres). Fecal material and other evidence obtained were tested and confirmed to be those of a lynx. No one actually saw a lynx, however. Lynx have not been seen in Yellowstone since 1998, though DNA taken from hair samples showed that lynx were at least passing through the park. Other mammals that are seen less often are the mountain lion and wolverine. There are about 25 mountain lions in the park. People do not know how many wolverines there are.

Yellowstone is also home to six species of reptiles, such as the painted turtle and prairie rattlesnake, and four species of amphibians, including the boreal chorus frog.

311 species of birds have been reported. Almost half of them nest in Yellowstone. As of 1999, twenty-six pairs of nesting bald eagles have been documented. Extremely rare sightings of whooping cranes have been recorded; only three are known to live in the Rocky Mountains, out of 385 known worldwide. Other birds, considered to be species of special concern because of their rarity in Yellowstone, include the common loon, harlequin duck, osprey, peregrine falcon and the trumpeter swan.

The reason for the extraordinary climate in Yellowstone is the location of the Rocky Mountains. The temperature at the Mammoth Hot Springs is between 8.6 °F (−13.0 °C) in January and 81 °F (27 °C) in July. Sudden temperature increase or decrease in the middle of a year are not a rare thing.

Yellowstone has had many tourists. This is mostly because of the natural beauty of the Yellowstone park. Millions of people come to see it each and every year.

The park can be reached by five entrances: from the north through Livingston and Gardiner (Montana), by northeast through the Beartooth-Pass (Wyoming), by east through Cody, by south from Jackson, by bypassing the Grand-Teton-national park and by west through the Idaho Falls (Idaho).

More than 2.8 million tourists have visited Yellowstone since 1990. In 2010, 3.64 million people visited it. About 140,000 people come in the winter to see snow attractions, for example driving snowmobiles. More than 4,500 people work in the various hotels, parks and shops. 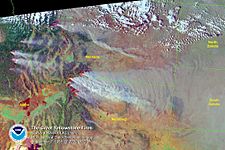 Yellowstone fires of 1988 on satellite

Conservation of the environment and life was a main reason for creating the national parks.

Even before the creation of Yellowstone, the naturalist Henry David Thoreau and other supporters asked the government to protect nature and animals in that area. However, when the park was finally created, there was no such law. A law to protect most of the animals from being shot was not adopted until 1883, nearly 10 years after the creation of the park. Hunting "protected" animals was forbidden under that law. Nevertheless, poachers could still operate. So in 1894, a new law called National Park Protection Act was adopted. The US Congress protected nature, wildlife and other natural resources. The new law forbade the killing or destroying of them, and only fishing was allowed. Nature, for example trees, mineral resources and other things, was not allowed to be harmed.

Because Yellowstone has many forests, some fires could occur. The last big fires were the "Yellowstone fires of 1988". They damaged more than 560 square miles (1,500 km2) of forest area and burned out more than 890 square miles (2,300 km2) of trees and forest. Also 97 square miles (250 km2) of bush and grass were damaged. The effect of the fire can still be seen in some places, even after more than 30 years.

After 1988, new fire management plans were introduced: people are now not to fight the fire, but let them burn and watch them carefully. This is to keep the fire controlled. According to the 2004 plan, natural wildfires are allowed to burn, so long as fire size, weather and potential danger are within limits.

All content from Kiddle encyclopedia articles (including the article images and facts) can be freely used under Attribution-ShareAlike license, unless stated otherwise. Cite this article:
Yellowstone National Park Facts for Kids. Kiddle Encyclopedia.