A continental divide is a drainage divide on a continent such that the drainage basin on one side of the divide feeds into one ocean or sea, and the basin on the other side either feeds into a different ocean or sea, or else is endorheic, not connected to the open sea. 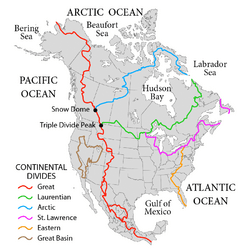 Major continental divides, showing drainage into the major oceans and seas of the world. Grey areas are endorheic basins that do not drain to the ocean

All content from Kiddle encyclopedia articles (including the article images and facts) can be freely used under Attribution-ShareAlike license, unless stated otherwise. Cite this article:
Continental divide Facts for Kids. Kiddle Encyclopedia.