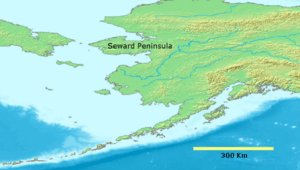 The town of Seward, Alaska is actually not there. It is much further south on the Kenai Peninsula.

The Seward Peninsula was once part of the Bering land bridge. This was a strip of land that used to exist that connected Alaska with Siberia with mainland Alaska. It existed millions of years ago during a time called the Pleistocene Ice Age. People, animals, and plants all came across the lad bridge into North America Archaeologists have found proof that Inupiat Eskimos have been living there for thousands of years.

The Peninsula does not have a lot of people today. There are no roads going there. The largest town is Nome. There are about 3,000 people there. The next largest town, Shishmaref, has less than 600 people. Most of the other towns there have only a few hundred people. Some old mining towns there have no people left at all and have become ghost towns. 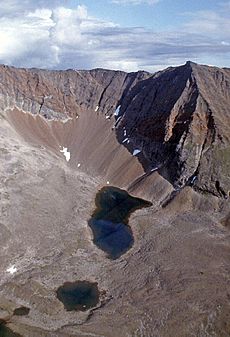 The Devil Mountain Lakes are on the Seward Peninsula. They are a kind of lake called a maar which is made by a volcano. The Devil Mountain Lakes are the biggest lakes like this in the whole world.There are four mountain ranges on the peninsula, the biggest ones are the Kigluaik (or Sawtooth) Mountains. The highest point on peninsula is the peak of 4,714-foot (1,437 m) Mount Osborn. Other mountain ranges on the Seward Peninsula include the Bendeleben Mountains, Darby Mountains, and York Mountains. There is also a big lava flow called The Lost Jim Lava Flow. Several hot springs are located throughout the peninsula as well.

The Seward Peninsula has several rivers. The rivers are important to the people who live there for several reasons. One reason is that they can catch fish to eat in them. Another reason is that they can travel by boat since there no roads. That way they can get to other towns on the river or to places where there are animals to hunt. Finding food is important there because there are not a lot of stores and it costs a lot of money to take food that far in an airplane or boat. The rivers freeze in the wintertime.

The most common kind of tree there is called a Black spruce. It is a kind of pine tree.

Cape Prince of Wales is on the Peninsula. No other part of the mainland of North America is further west. It is only 52 miles (84 km) from Russia.

All content from Kiddle encyclopedia articles (including the article images and facts) can be freely used under Attribution-ShareAlike license, unless stated otherwise. Cite this article:
Seward Peninsula Facts for Kids. Kiddle Encyclopedia.