Seward (Alutiiq: Qutalleq) is a city in Kenai Peninsula Borough in the U.S. state of Alaska. According to 2014 Census Bureau estimates, the population of the city is 2,528. It was named after William H. Seward, United States Secretary of State under Abraham Lincoln and Andrew Johnson. In 1867, he fought for the U.S. purchase of Alaska which he finally negotiated to acquire from Russia.

Mile 0 of the historic Iditarod Trail is at Seward. In the early 1900s the trail was blazed in order to transport people and goods to and from the port of Seward to interior Alaska.

In 1793 Alexander Baranov of the Shelikhov-Golikov company (precursor of the Russian-American Company) established a fur trade post on Resurrection Bay where Seward is today, and had a three-masted vessel, the Phoenix, built at the post by James Shields, an English shipwright in Russian service.

The 1939 Slattery Report on Alaskan development identified the region as one of the areas where new settlements would be established through Jewish immigration. This plan was never implemented.

A large portion of Seward was damaged by shaking and a local tsunami during the 1964 Alaska earthquake. 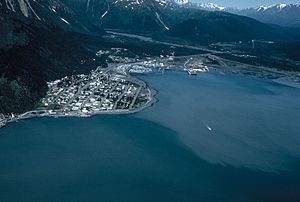 Seward has, depending on the isotherm, a subpolar oceanic climate (Köppen Cfc) or a subarctic climate (Köppen Dfc), and lies just within the subpolar/subarctic zone, with moderate temperatures for Alaska and, due to its location along the Gulf of Alaska coast, high levels of precipitation.

There were 917 households out of which 35.7% had children under the age of 18 living with them, 44.6% were married couples living together, 12.1% had a female householder with no husband present, and 39.4% were non-families. 30.8% of all households were made up of individuals and 7.1% had someone living alone who was 65 years of age or older. The average household size was 2.40 and the average family size was 3.04. 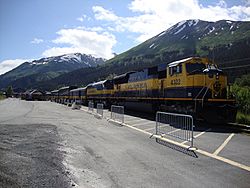 A northbound Alaska Railroad passenger train idles at the Seward depot on June 30, 2010 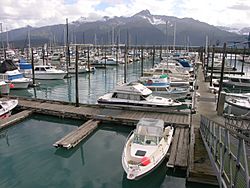 Seward is unusual among most small Alaskan communities in that it has road access in the Seward Highway from Seward to Anchorage, a National Scenic Byway and All-American Road, which also brings it bus service. Seward is also the southern terminus of the Alaska Railroad. This keeps the port busy with freight coming on and off the trains, but also makes Seward a primary end point for north-bound cruise ships. Cruise ship passengers disembark and often take the train or bus farther north to Anchorage, Denali, or other Alaskan attractions.

Seward is a very bike friendly community. A paved bike path runs from the downtown business district along the waterfront, through the harbor and along the highway to mile 4.5. Bikes are available for rent and there are guided bike tours of the area.

Alaska Marine Highway (ferry) service was discontinued at the end of the 2005. State ferry connections are now available in Whittier (90 miles North) or Homer (150 miles by highway). 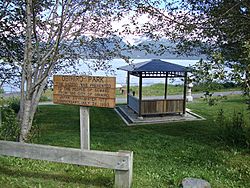 Obihiro Park, with gazebo given to the people of Seward in 1993. Resurrection Bay is in the background

Attractions and points of interest 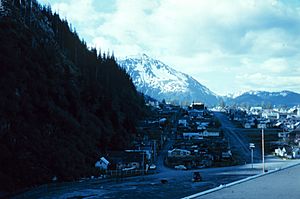 All content from Kiddle encyclopedia articles (including the article images and facts) can be freely used under Attribution-ShareAlike license, unless stated otherwise. Cite this article:
Seward, Alaska Facts for Kids. Kiddle Encyclopedia.