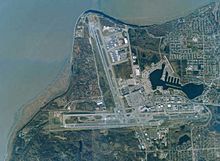 Ted Stevens Anchorage International Airport (IATA: ANC, ICAO: PANC, FAA LID: ANC) is a major airport in the U.S. state of Alaska. It is located 5 miles (8 km) southwest of downtown Anchorage. The airport is named for Ted Stevens, a U.S. senator from Alaska in office from 1968 to 2009.

It is included in the Federal Aviation Administration (FAA) National Plan of Integrated Airport Systems for 2017–2021, in which it is categorized as a medium-hub primary commercial service facility.

All content from Kiddle encyclopedia articles (including the article images and facts) can be freely used under Attribution-ShareAlike license, unless stated otherwise. Cite this article:
Ted Stevens Anchorage International Airport Facts for Kids. Kiddle Encyclopedia.