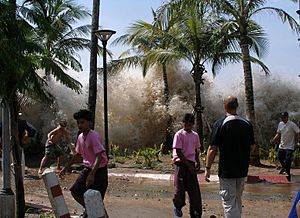 Tsunami that occurred in 2004 in Thailand. The water of the wave can be seen behind the palm trees in the background. 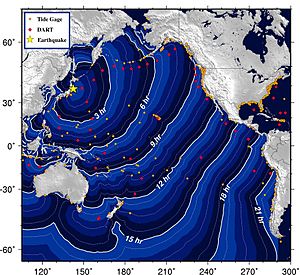 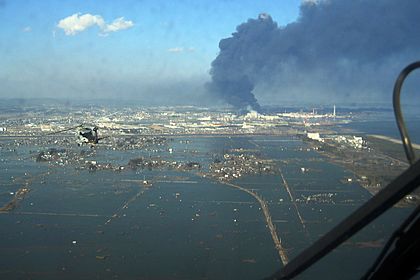 2011 Tōhoku earthquake and tsunami, An aerial view of damage in the Sendai region with black smoke coming from the Nippon Oil Sendai oil refinery

A tsunami is a natural disaster which is a series of fast-moving waves in the ocean caused by powerful earthquakes, volcanic eruptions, landslides, or simply an asteroid or a meteor crash inside the ocean. A tsunami has a very long wavelength. It can be hundreds of kilometers long. Usually, a tsunami starts suddenly. The waves travel at a great speed across an ocean with little energy loss. They can remove sand from beaches, destroy trees, toss and drag vehicles, houses and even destroy whole towns. Tsunamis can even be caused when a meteorite strikes the earth's surface, though it is very rare. A tsunami normally occurs in the Pacific Ocean, especially in what is called the ring of fire, but can occur in any large body of water.

The water often draws back from the seacoast half of the wave period prior to the wave getting to the coast. If the slope of the coast is not steep, the water may pull back for hundreds of meters. People who do not know of the danger often remain at the shore.

Tsunamis cannot be prevented. However, there are ways to help stop people dying from a tsunami. International and regional warning systems, especially for the Pacific Ocean, issue alerts before the big waves reach the shore. Because the earthquake that caused the tsunami can be felt before the wave gets to the shore, people can be warned to go somewhere safe.

Tsunamis are often called tidal waves because they usually rise and fall more slowly than ordinary ocean surface waves. This name is misleading, because tsunamis are not related to tides; they merely rise slowly as a series of fast-moving waves in the ocean caused by powerful earthquakes or volcanic eruptions.

The deadliest tsunami recorded in documented history was on 26 December 2004, and is known as the 2004 Indian Ocean Tsunami. It was caused by an earthquake. The earthquake was said to have a magnitude of 9.3 on the Moment magnitude scale. It was centered in the ocean near the coast of Sumatra, Indonesia. Over 215,000 people, mainly on the shores of the Indian Ocean, died from this disaster. The giant wave moved very quickly. Thousands of people in Indonesia, Sri Lanka, Thailand, India, Somalia, and other nations, were killed or injured by it.

Yet, the most expensive tsunami ever was the 2011 Tōhoku earthquake and tsunami. It is said to have cost the Japanese government around $150 billion, which is equivalent to about 12 trillion yen. It went a huge distance in inland, and is also the 4th largest tsunami in history.

There is another type of tsunami known as a megatsunami, which is mainly due to external impact on the ocean, like an asteroid or meteor crash, a landslide, a rockslide etc. 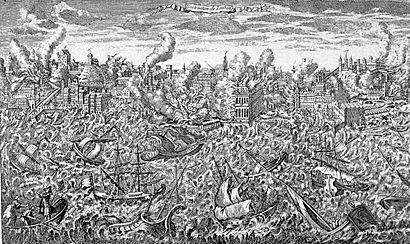 Lisbon earthquake and tsunami in November 1755.

While Japan may have the longest recorded history of tsunamis, the sheer destruction caused by the 2004 Indian Ocean earthquake and tsunami event mark it as the most devastating of its kind in modern times, killing around 230,000 people. The Sumatran region is also accustomed to tsunamis, with earthquakes of varying magnitudes regularly occurring off the coast of the island.

Of historical and current importance are the 1755 Lisbon earthquake and tsunami (which was caused by the Azores–Gibraltar Transform Fault), the 1783 Calabrian earthquakes, each causing several tens of thousands of deaths and the 1908 Messina earthquake and tsunami. The tsunami claimed more than 123,000 lives in Sicily and Calabria and is among the most deadly natural disasters in modern Europe. The Storegga Slide in the Norwegian Sea and some examples of tsunamis affecting the British Isles refer to landslide and meteotsunamis predominantly and less to earthquake-induced waves.

As early as 426 BC the Greek historian Thucydides inquired in his book History of the Peloponnesian War about the causes of tsunami, and was the first to argue that ocean earthquakes must be the cause.

The Roman historian Ammianus Marcellinus (Res Gestae 26.10.15–19) described the typical sequence of a tsunami, including an earthquake, the sudden retreat of the sea and a following gigantic wave, after the 365 AD tsunami devastated Alexandria.

The principal generation mechanism of a tsunami is the displacement of a substantial volume of water. This displacement of water is usually attributed to either earthquakes, landslides, volcanic eruptions, glacier calvings or more rarely by meteorites and nuclear tests.

Tsunamis can be generated when the sea floor abruptly deforms and vertically displaces the overlying water.

Tectonic earthquakes are a particular kind of earthquake that are associated with the Earth's crust deforming; when these earthquakes occur beneath the sea, the water above the deformed area is displaced. Movement on normal faults can also cause displacement of the seabed, but only the largest of such events cause enough displacement to cause a significant tsunami, such as the 1977 Sumba and 1933 Sanriku events.

When the wave enters shallow water, it slows down and its amplitude (height) increases.

Tsunamis have a small wave height offshore, and a very long wavelength (often hundreds of kilometres long, whereas normal ocean waves have a wavelength of only 30 or 40 metres), which is why they generally pass unnoticed at sea, forming only a slight swell usually about 300 millimetres (12 in) above the normal sea surface. They grow in height when they reach shallower water. A tsunami can occur in any tidal state and even at low tide can still inundate coastal areas.

In the 1950s, it was discovered that tsunamis larger than had previously been believed possible can be caused by giant submarine landslides.

These rapidly displace large water volumes, as energy transfers to the water at a rate faster than the water can absorb.

Some meteorological conditions, especially rapid changes in barometric pressure, as seen with the passing of a front, can displace bodies of water enough to cause trains of waves with wavelengths like seismic tsunamis, but usually with lower energies.

There have been studies and one actual attempt to create tsunami waves as a tectonic weapon.

Tsunamis are made by permanent large vertical displacements of very large volumes of water which do not occur in explosions. 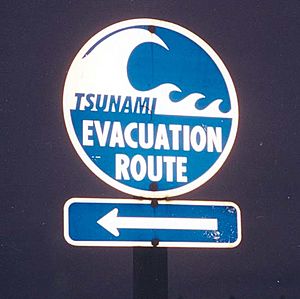 Tsunamis are very strong and can go many kilometers inland. Around 5 to 10 minutes before a tsunami hits, the sea seems to go back by an unusual distance. This is a warning that a tsunami can occur.

The best way to evacuate is to climb to an elevated area. If a person notices strange or unusual behavior in animals, he/she can also take that as a warning and go inland. However, if it still looks like the wave can absorb the person, the most suitable alternative will be to hold on to something sturdy, like a tree, so he/she does not totally get carried away and injured.

All content from Kiddle encyclopedia articles (including the article images and facts) can be freely used under Attribution-ShareAlike license, unless stated otherwise. Cite this article:
Tsunami Facts for Kids. Kiddle Encyclopedia.