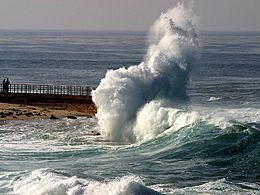 Ocean surface waves are surface waves that occur in the upper layer of the ocean. They usually result from wind or geologic effects like earthquakes or vulcanicity and may travel thousands of miles before striking land. They range in size from small ripples to huge tsunamis. There is little actual forward motion of individual water particles in an unbroken wave, despite the large amount of energy and momentum it may carry forward.

The great majority of large breakers one sees on an ocean beach result from distant winds. Three factors influence the formation of "wind waves":

All of these factors work together to determine the size and shape of ocean waves. The greater each of the variables, the larger the waves. Waves are measured by:

Waves in a given area typically have a range of sizes. For weather reporting and for scientific analysis of wind wave statistics, their size over a period of time is usually expressed as "significant wave height." This figure represents the average height of the highest one-third of the waves in a given time period (usually twelve hours) or in a specific wave or storm system. Given the variability of wave size, the largest individual waves are likely to be twice the reported significant wave height for a particular day or storm.

All content from Kiddle encyclopedia articles (including the article images and facts) can be freely used under Attribution-ShareAlike license, unless stated otherwise. Cite this article:
Ocean surface wave Facts for Kids. Kiddle Encyclopedia.