Alexandria was founded in c. 331 BC by Alexander the Great, king of Macedon and leader of the Greek League of Corinth, during his conquest of the Achaemenid Empire. An Egyptian village named Rhacotis existed at the location and grew into the Egyptian quarter of Alexandria. Alexandria grew rapidly to become an important centre of Hellenistic civilization and remained the capital of Ptolemaic Egypt and Roman and Byzantine Egypt for almost 1,000 years, until the Muslim conquest of Egypt in AD 641, when a new capital was founded at Fustat (later absorbed into Cairo). Hellenistic Alexandria was best known for the Lighthouse of Alexandria (Pharos), one of the Seven Wonders of the Ancient World; its Great Library (the largest in the ancient world); and the Necropolis, one of the Seven Wonders of the Middle Ages. Alexandria was the intellectual and cultural centre of the ancient Mediterranean world for much of the Hellenistic age and late antiquity. It was at one time the largest city in the ancient world before being eventually overtaken by Rome.

By the time of the Arab conquest of Egypt in 641 AD, the city had already been largely plundered and lost its significance before re-emerging in the modern era. From the late 18th century, Alexandria became a major centre of the international shipping industry and one of the most important trading centres in the world, both because it profited from the easy overland connection between the Mediterranean Sea and the Red Sea, and the lucrative trade in Egyptian cotton. 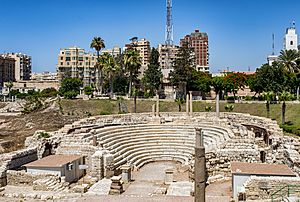 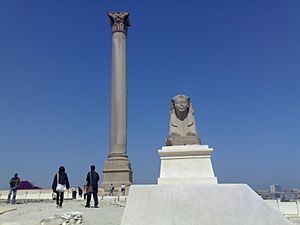 Due to the constant presence of war in Alexandria in ancient times, very little of the ancient city has survived into the present day. Much of the royal and civic quarters sank beneath the harbour due to earthquake subsidence in AD 365, and the rest has been built over in modern times. 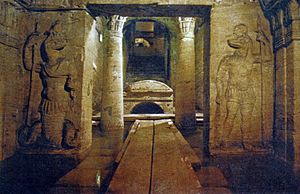 "Pompey's Pillar", a Roman triumphal column, is one of the best-known ancient monuments still standing in Alexandria today. It is located on Alexandria's ancient acropolis—a modest hill located adjacent to the city's Arab cemetery. Including its pedestal, it is 30 m (99 ft) high; the shaft is of polished red granite, 2.7 m (8.9 ft) in diameter at the base, tapering to 2.4 m (7.9 ft) at the top. The shaft is made out of a single piece of granite. Its volume is 132 cubic meters (4,662 cubic feet) and weight approximately 396 tons.

Pompey's Pillar may have been erected using the same methods that were used to erect the ancient obelisks. The Romans had cranes but they were not strong enough to lift something this heavy. The structure was plundered and demolished in the 4th century when a bishop decreed that Paganism must be eradicated.

Beneath the acropolis itself are the subterranean remains of the Serapeum, whose carved wall niches are believed to have provided overflow storage space for the ancient Library. In more recent years, many ancient artifacts have been discovered from the surrounding sea, mostly pieces of old pottery.

Alexandria's catacombs, known as Kom El Shoqafa, are a short distance southwest of the pillar, consist of a multi-level labyrinth, reached via a large spiral staircase, and featuring dozens of chambers adorned with sculpted pillars, statues, and other Romano-Egyptian religious symbols, burial niches, and sarcophagi, as well as a large Roman-style banquet room, where memorial meals were conducted by relatives of the deceased. The catacombs were long forgotten by the citizens until they were discovered by accident in 1900.

The most extensive ancient excavation currently being conducted in Alexandria is known as Kom El Deka. It has revealed the ancient city's well-preserved theater, and the remains of its Roman-era baths. 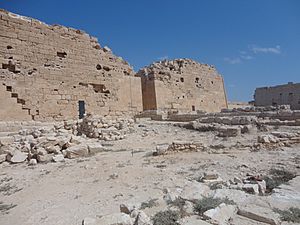 Side view of The Temple of Taposiris Magna

Since the great and growing modern city stands immediately over the ancient one, it is almost impossible to find any considerable space in which to dig, except at enormous cost. The spaces that are most open are the low grounds to northeast and southwest, where it is practically impossible to get below the Roman strata.

Cleopatra VII's royal quarters were rocked by earthquakes and tsunami, leading to gradual subsidence in the 4th century AD. This underwater section, containing many of the most interesting sections of the Hellenistic city, including the palace quarter, were explored in 1992 and are still being extensively investigated. These area's are being opened up to tourists, to some controversy.

The making of the new foreshore led to the dredging up of remains of the Patriarchal Church; and the foundations of modern buildings are seldom laid without some objects of antiquity being discovered. The wealth underground is without doubt immense; but despite all efforts, there is not much for collectors to see in Alexandria outside the museum and the neighborhood of "Pompey's Pillar". 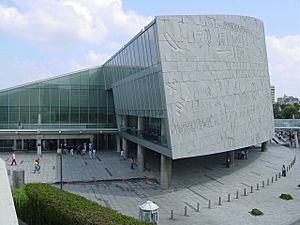 The Royal Library of Alexandria, in Alexandria, Egypt, was once the largest library in the world. It is generally thought to have been founded at the beginning of the 3rd century BC, during the reign of Ptolemy II of Egypt. It was likely created after his father had built what would become the first part of the library complex, the temple of the Muses. The Bibliotheca Alexandrina was inaugurated in 2002, near the site of the old Library.

The Alexandria Opera House is where classical music, Arabic music, ballet, and opera are performed. Alexandria National Museum was inaugurated 31 December 2003. It is located in a restored Italian style palace near the center of the city. It contains about 1,800 artifacts that tell the story of Alexandria and Egypt. Most of these pieces came from other Egyptian museums. Construction on the site was first undertaken in 1926. Other museums are: 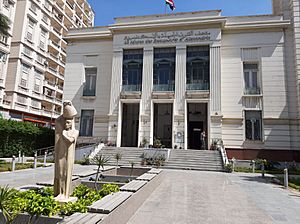 Throughout Alexandra, there is art that resembles some of the oldest architectural styles of the Hellenic city, and its ancient decorations, especially in the Bibliotheca Alexandrina, is based on reviving the ancient Library of Alexandria.

The Kom el shoqafa Catacombs are considered one of the Seven Wonders of the Middle Ages and date back to the 2nd century. The remnants of Pompey's Pillar still remain today. 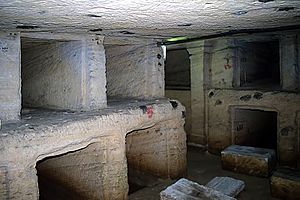 This single pillar represents the elaborate temple which once stood in Alexandria. It remains at the site of the Serapeum, Alexandria's acropolis.

The Serapeum is a large tourist destination, today. The Roman Amphitheatre of Alexandria is another popular destination. Here, there remains a stage with around seven hundred to eight hundred seats. They also have numerous galleries of statues and details leftover form this time.

Alexandria's tourism office announced plans to reserve some beaches for tourists in July 2018.

All content from Kiddle encyclopedia articles (including the article images and facts) can be freely used under Attribution-ShareAlike license, unless stated otherwise. Cite this article:
Alexandria Facts for Kids. Kiddle Encyclopedia.