Lighthouse of Alexandria facts for kids 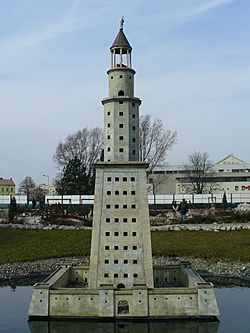 Replica of the Lighthouse of Alexandria 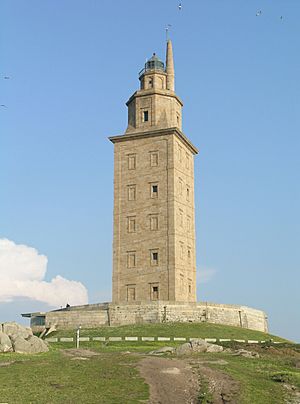 The Hercules Tower, in A Coruña, Spain. It was probably built in the 2nd century, and is similar to the lighthouse of Alexandria.

The Lighthouse of Alexandria, or the Pharos, was a tall tower built between 285 and 247 BCE. It was built on the island of Pharos in Alexandria, Egypt to serve as a lighthouse for sailors. The top of the tower had a mirror that reflected sunlight during the day; a fire was lit at night.

Legend holds that Ptolemy I Soter would not allow Sostratus to put his name on the tower, but the architect left the following inscription on the base's walls:

These words were hidden under a layer of plaster, on top of which was chiseled another inscription honoring Ptolemy the king as builder of the Pharos. After centuries the plaster wore away, revealing the name of Sostratus.

With a height estimated at between 115 and 145 meters (384 – 469 ft), it was among the tallest man-made structures on Earth for many centuries. It was identified as one of the Seven Wonders of the World by Antipater of Sidon. It was the third tallest building after the two Great Pyramids (of Khufu and Khafra). It was destroyed by earthquakes.

Divers discovered remains of the lighthouse in fall 1994 on the floor of Alexandria's Eastern Harbour. Some of these remains were brought up and were lying at the harbour on public view at the end of 1995. An episode of the PBS television series Nova chronicled the discovery. Later satellite imaging has revealed further remains. It is possible to go diving and see the ruins.

All content from Kiddle encyclopedia articles (including the article images and facts) can be freely used under Attribution-ShareAlike license, unless stated otherwise. Cite this article:
Lighthouse of Alexandria Facts for Kids. Kiddle Encyclopedia.