The Rijksmuseum is a Dutch museum. It is run by the government and focused on the arts and history of Amsterdam. The museum is located in Amsterdam

The Rijksmuseum was opened in The Hague in 1800. It then moved to Amsterdam in 1808. The current main building was designed by Pierre Cuypers and opened in 1885. In 2013 and 2014, it was the most visited museum in the Netherlands. It is also the largest art museum in the country.

The museum has 8,000 items that can be seen by those who go to it. This is out of a total of 1 million items. The collection includes items by Rembrandt, Frans Hals, and Johannes Vermeer. The museum also has a small collection of Asian items. 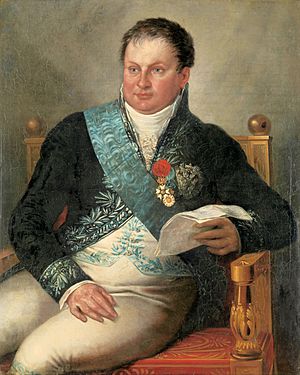 The year 1795 marked the start of the Batavian Republic. One of the members of the new government was Isaac Gogel. He suggested a new national museum, like the French Louvre. On 19 November 1798, the government agreed to the museum.

On 31 May 1800, the new museum opened. It was at first known as the National Art Gallery (Dutch: Nationale Kunst-Galerij). It had about 200 paintings and other items. These came from the collections of the Dutch stadtholders.

In 1806, the Kingdom of Holland was established by Napoleon Bonaparte. It replaced the Batavian Republic. In 1808, the museum moved to Amsterdam as ordered by Louis Bonaparte. After the move, more paintings were added. These included The Night Watch by Rembrandt.

In 1863, there was a design contest for a new building for the museum. None of the submissions were selected.

In 1876, a new contest was held and this time Pierre Cuypers won. His design was a mix of gothic and renaissance. The work on the new building start on 1 October 1876. It opened on 13 July 1885.

In 1890, another building was added a short distance to the south-west of the Rijksmuseum. This one was made out of pieces of demolished buildings. It has since become known as the 'fragment building'. It is also known as the 'south wing' and is currently (in 2013) branded as the Philips Wing.

The south wing of the museum was repaired in 1996. 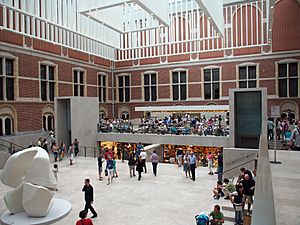 The atrium after the repairs in 2013

In December 2003, the main building was closed for repair. During these repairs, about 400 items could still be viewed in the south wing. These included Rembrandt's The Night Watch and other 17th-century paintings.

The main building was designed by Pierre Cuypers and opened in 1885. It has two squares with an atrium in each centre. The Rijksmuseum is a national heritage site since 1970.

The collection has 1 million items of arts, crafts, and history. These come from the years 1200 to 2000. Around 8000 of these items can be viewed in the museum.

The collection has more than 2,000 paintings from the Dutch Golden Age. Some are from notable painters such as Jacob van Ruisdael, Frans Hals, Johannes Vermeer, Jan Steen, Rembrandt, and Rembrandt's students.

The museum also has a small Asian collection.

It also displays the stern of HMS Royal Charles which was captured in the Raid on the Medway, and the Hartog plate.

In 2012, the museum made 125,000 high-resolution images available for download. It plans to add another 40,000 images per year until the entire collection is available.

Rijks, stylized as RIJKS®, is a restaurant in the Philips Wing. Joris Bijdendijk has been the chef since the opening in 2014. The restaurant was awarded a Michelin star in 2017.

All content from Kiddle encyclopedia articles (including the article images and facts) can be freely used under Attribution-ShareAlike license, unless stated otherwise. Cite this article:
Rijksmuseum Facts for Kids. Kiddle Encyclopedia.