Suriname, or Surinam, Dutch Guiana, Dutch Guyana or Sranang is a country in South America. The official name of the country is Republiek Suriname (this is Dutch and translates to Republic of Suriname). It used to be known as Nederlands Guyana, Netherlands Guiana or Dutch Guiana. It is between Guyana and French Guiana. Paramaribo is the capital city. About half a million people live in the country. Suriname became independent from the Netherlands in 1975. Before that, it was a part of the Kingdom of the Netherlands. 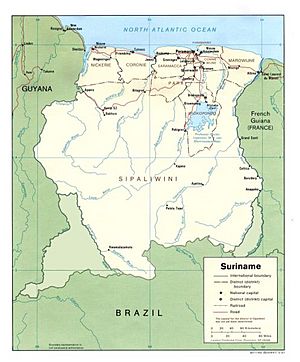 Map of Suriname, with the disputed territories shown

There are border disputes with French Guiana and Guyana all to the south of the country.

The industry of the country is centered on the mining and processing of bauxite. This makes up 15 percent of the Gross Domestic Product and more than 70% of the exports. Other exports are sugar, oil and gold. About 25% of the working people are employed in agriculture. The main trade partners are the Netherlands, the United States and countries in the Caribbean.

Dutch, French, Spanish and English explorers discovered the area in the early 16th century. A century later, sugar plantation colonies were established by the Dutch and English along the many rivers in the fertile Guyana plains. After the second Anglo-Dutch War England traded any claims to the territory for New Amsterdam which became New York. 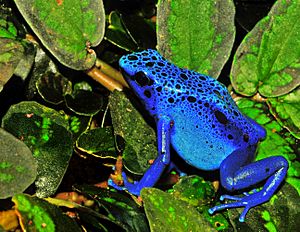 The blue poison dart frog is endemic to Suriname.

Due to the variety of habitats and temperatures, biodiversity in Suriname is considered high. In October 2013, 16 international scientists researching the ecosystems during a three-week expedition in Suriname's Upper Palumeu River Watershed cataloged 1,378 species and found 60—including six frogs, one snake, and 11 fish—that may be previously unknown species. According to the environmental non-profit Conservation International, which funded the expedition, Suriname's ample supply of fresh water is vital to the biodiversity and healthy ecosystems of the region.

Snakewood (Brosimum guianense), a shrub-like tree, is native to this tropical region of the Americas. Customs in Suriname report that snakewood is often illegally exported to French Guiana, thought to be for the crafts industry.

All content from Kiddle encyclopedia articles (including the article images and facts) can be freely used under Attribution-ShareAlike license, unless stated otherwise. Cite this article:
Suriname Facts for Kids. Kiddle Encyclopedia.