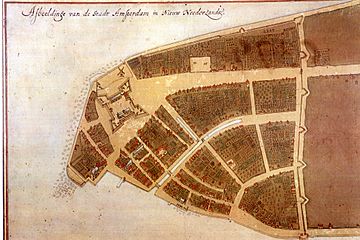 New Amsterdam (Dutch: Nieuw Amsterdam or) was a 17th-century Dutch settlement established at the southern tip of Manhattan Island that served as the seat of the colonial government in New Netherland. The factorij became a settlement outside Fort Amsterdam. The fort was situated on the strategic southern tip of the island of Manhattan and was meant to defend the fur trade operations of the Dutch West India Company in the North River (Hudson River). In 1624, it became a provincial extension of the Dutch Republic and was designated as the capital of the province in 1625.

New Amsterdam was renamed New York on September 8, 1664, in honor of the Duke of York (later James II of England), in whose name the English had captured it. After the Second Anglo-Dutch War of 1665–1667, England and the United Provinces of the Netherlands agreed to the status quo in the Treaty of Breda. The English kept the island of Manhattan, the Dutch giving up their claim to the town and the rest of the colony, while the English formally abandoned Surinam in South America, and the island of Run in the East Indies to the Dutch, confirming their control of the valuable Spice Islands. Today much of what was once New Amsterdam is New York City.

All content from Kiddle encyclopedia articles (including the article images and facts) can be freely used under Attribution-ShareAlike license, unless stated otherwise. Cite this article:
New Amsterdam Facts for Kids. Kiddle Encyclopedia.