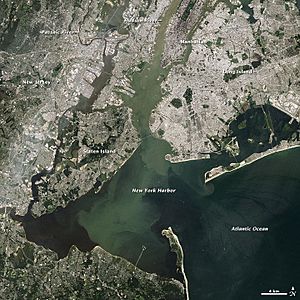 New York Bay is the large body of water surrounding the mouth of the Hudson River where it empties into the Atlantic Ocean. It is shared by the states of New York and New Jersey in the United States.

The term New York Harbor usually refers to Upper New York Bay and the surrounding Port of New York and New Jersey, but sometimes is taken to be a synonym for New York Bay.

Upper New York Bay includes several islands. Liberty Island is the location of the Statue of Liberty. Nearby Ellis Island is known as a former immigration station. Governors Island is a former military base, now a park and historic site. Robbins Reef Light is also in the upper bay. Lower New York Bay includes Hoffman Island and nearby Swinburne Island. Both are artificial islands that are closed to the public.

Commissioned by King Francis I of France, the Florentine explorer Giovanni da Verrazzano is the first European to discover the Bay in 1524. He gave it the name of « New Angoulême » in honor of the King who was also Count of Angoulême

All content from Kiddle encyclopedia articles (including the article images and facts) can be freely used under Attribution-ShareAlike license, unless stated otherwise. Cite this article:
New York Bay Facts for Kids. Kiddle Encyclopedia.