The Narrows facts for kids 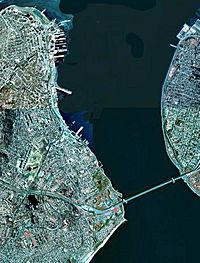 A satellite view of the Narrows.

The Narrows is the tidal strait splitting up the New York City boroughs of Staten Island and Brooklyn. It connects the Upper and Lower New York Bay and makes the channel where the Hudson River can empty into the Atlantic Ocean. It is believed that the Narrows were most likely formed after deposition of the Harbor Hill Moraine about 18,000 years ago just before to the end of the last ice age. Staten Island and Brooklyn used to be connected and the Hudson River emptied into the ocean through the Raritan River and taking course through present day northern New Jersey. A build up of water in the Upper Bay allowed the river to break through to form the Narrows less than 12,000 to 13,000 years ago as it exists today.

The first recorded European entrance into the Narrows was in 1524 by Florentine explorer Giovanni da Verrazzano, who set anchor in the strait and was greeted by a group of Lenape in canoes. A 1964 bridge across the Narrows was named for him.

All content from Kiddle encyclopedia articles (including the article images and facts) can be freely used under Attribution-ShareAlike license, unless stated otherwise. Cite this article:
The Narrows Facts for Kids. Kiddle Encyclopedia.