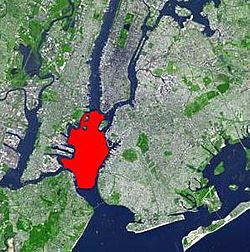 New York Harbor, showing Upper New York Bay in red. It is connected to Lower New York Bay on the south by the Narrows. Ellis Island (north) and Liberty Island (south) are shown in the northwest corner of the bay.

Upper New York Bay, or Upper Bay, is the traditional heart of the Port of New York and New Jersey, and often called New York Harbor. It is enclosed by the New York City boroughs of Manhattan, Brooklyn, and Staten Island and the Hudson County, New Jersey, municipalities of Jersey City and Bayonne.

The Upper Bay is fed by the waters of the Hudson River (historically called the North River as it passes Manhattan), as well as the Gowanus Canal. It is connected to Lower New York Bay by the Narrows, to Newark Bay by the Kill Van Kull, and to Long Island Sound by the East River, which despite the name, is actually a tidal strait. It provides the main passage for the waters of the Hudson River as it empties through the Narrows. The channel of the Hudson as it passes through the harbor is called the Anchorage Channel and is approximately 50 feet deep in the midpoint of the harbor.

A project to replace two water mains between Brooklyn and Staten Island which will eventually allowing for dredging of the channel to nearly 100 feet (30 m) was begun in April 2012.

It contains several islands including Governors Island, near the mouth of the East River, as well Ellis Island, Liberty Island, and Robbins Reef which are supported by a large underwater reef on the New Jersey side of the harbor. The reef was historically one of the largest oyster beds in the world and provided a staple for the diet of all classes of citizens both locally and regionally until the end of the 19th century, when the beds succumbed to pollution.

Historically, it has played an extremely important role in the commerce of the New York metropolitan area. The Statue of Liberty National Monument recalls the immigrant experience during the late 19th and early 20th century.

Since the 1950s, container ship traffic has been primarily routed through the Kill Van Kull to Port Newark-Elizabeth Marine Terminal, where it is consolidated for easier automated transfer to land conveyance. As a consequence, the waterfront industries of the Upper Bay experienced a decline leading to diverse plans for revitalization, though important maritime uses remain at Red Hook, Port Jersey, MOTBY, Constable Hook, and parts of the Staten Island shore. Liberty State Park opened in 1976. In recent years, it has become a popular site for recreation sailing and kayaking.

The harbor is traversed by the Staten Island Ferry, which runs between Whitehall Street at the southernmost tip of Manhattan near Battery Park (South Ferry) and St. George Ferry Terminal on Richmond Terrace in Staten Island near Richmond County Borough Hall and Richmond County Supreme Court. NY Waterway operates routes across the bay and through The Narrows to locations near Sandy Hook.

The Upper Bay supports a very diverse population of marine species, allowing for recreational fishing, most commonly for striped bass and bluefish.

All content from Kiddle encyclopedia articles (including the article images and facts) can be freely used under Attribution-ShareAlike license, unless stated otherwise. Cite this article:
Upper New York Bay Facts for Kids. Kiddle Encyclopedia.